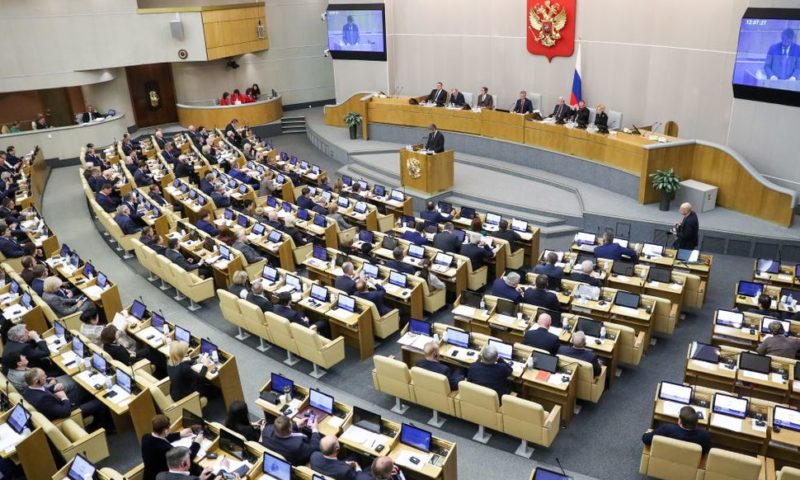 Critics worry that the state will use the laws to silence critics in the country, which already has severely restricted free speech freedoms.

RUSSIAN LAWMAKERS HAVE passed a pair of bills that would block websites from publishing what officials determine to be “fake news” and would criminalize insulting the state.

The Kremlin-controlled State Duma overwhelmingly passed both bills Thursday. The measures are expected to easily pass the upper chamber and be signed into law by President Vladimir Putin, according to the Associated Press.

Critics of the legislation say the rules would allow Russian authorities to further silence those who criticize or question the government. Several journalists and critics have been jailed or killed in in the past, and Russia ranks in the bottom of the World Press Freedom Index.

One of the bills would impose fines on anyone or any website who insults authorities, government agencies or the state and its symbols online. Second-time offenders would be jailed for up to 15 days, according to reports.

The other bill, which seeks to outlaw “fake news,” would ban “unreliable socially-important information” that could “endanger lives and public health, raise the threat of massive violation of public security and order or impede functioning of transport and social infrastructure, energy and communication facilities and banks,” according to the AP.

The bill says that state-run media watchdog Roskomnadzor would determine what qualifies as “fake news,” a term made popular by U.S. President Donald Trump for describing news he feels is unfavorable or not true.

Websites in Russia will have be given a day to remove the content deemed “fake news.” If they don’t comply, the website will be blocked and could face fines, according to Radio Free Europe/Radio Liberty.

Supporters said the legislation was necessary to protect society as a whole, and would not be a form of censorship.

“There is no talk about censorship,” said Sergei Boyarsky, a deputy head of the Duma’s committee for information policies, according to the AP. “It doesn’t ban criticism of officials or expression of views and opinions that differ from the official line.”

Critics, meanwhile, said the bills did not have clear parameters and would be used to punish those who spoke out against the government.