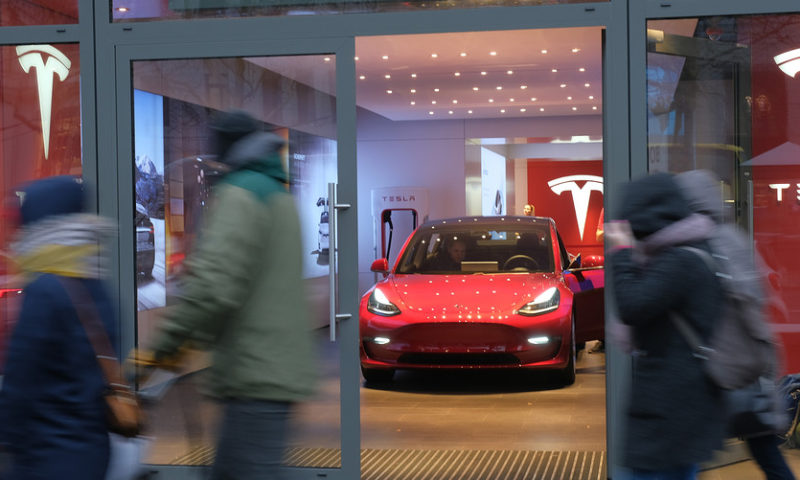 Tesla Inc. may have made good on its long-standing promise to offer a Model 3 for $35,000, but its stock fell late Thursday as Chief Executive Officer Elon Musk said the Silicon Valley car maker is likely to report a loss in the first quarter.

Tesla said Thursday its cheaper Model 3 version will have a shorter driving range and new interior options, and its website shows it available in the U.S. in as little as two weeks. After tax credits and gas savings, Tesla says the car costs about $24,450.

“Tesla’s biggest challenge going forward will be meeting production volumes and demand while maintaining timely service for a rapidly-expanding customer fleet,” he said. “If Tesla can do this, it will have successfully transitioned from a boutique auto maker with a niche audience to a mainstream brand serving mainstream consumers.”

Shares of Tesla TSLA, -3.34% were halted ahead of the 5 p.m. Eastern announcement, after ending the regular trading day up 1.6%. They resumed trading as the call with Musk and media was underway and most recently were down more than 3%.

Musk said Tesla could return to slim profitability in the second quarter.

The news of a $35,000 Model 3 is coming much earlier than expected, analysts at Wedbush said in a note.

It’s “a potential game changer for Musk and Tesla as the $35k vehicle at profitable margins is a linchpin to the bull thesis in the name, and we view this news as a major step forward,” said the analysts, led by Dan Ives.

“While there are still questions that need to be answered around logistics and delivery, combined with the margin profile on this model, we believe this strategic shift was the right move at the right time for Tesla, although the stock will be a ‘prove me’ name for the next 6-9 months,” they said.

Tesla also said it was shifting all its sales worldwide to online-only. The move, alongside other efficiencies, enabled the company to lower all vehicle prices by about 6% on average, the company said in a blog post.

In the call, Musk said the Tesla stores would turn into galleries, where customers would go to learn more about Teslas and electric vehicles, and into service centers. More layoffs were likely, but at another point during the call he said Tesla would need to hire more service technicians with the goal of shortening wait times for servicing.

The switch to online-only gives Tesla a chance to sell its vehicles in all U.S. states, regardless of franchise laws, he said. The company has waged long wars in certain U.S. states due to franchise laws limiting car sales to dealerships.

The decision to switch to online sales was “hard,” Musk said, but one that ultimately was right for Tesla and for the company’s future.

“This will be a fundamental, long-term competitive advantage for Tesla,” he said.

Earlier this week, Musk changed his Twitter name to “Elon Tusk” and teased the Thursday news, without elaborating further.

The “Tusk” name was just him “playing the fool on Twitter,” he said, with no connection to the news. On Thursday, he switched his name back to “Elon Musk.”