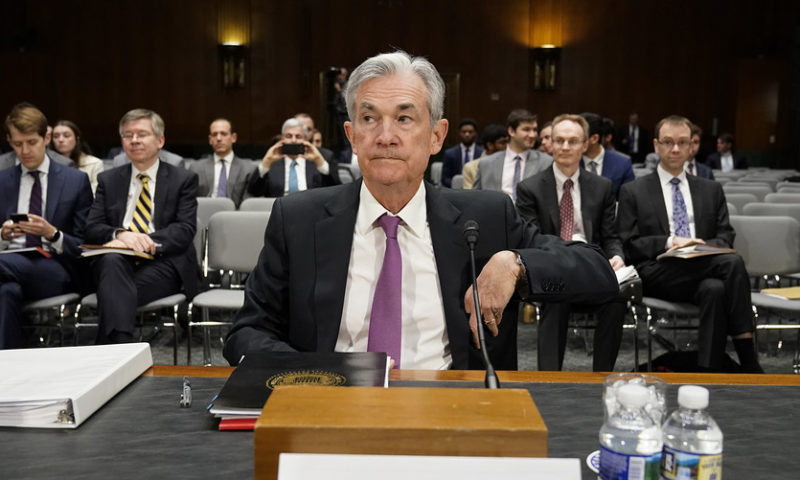 U.S. stocks closed lower Tuesday after weaving in and out of positive territory all session following Federal Reserve Chairman Jerome Powell’s congressional testimony, during which he reiterated the central bank’s wait-and-see approach. The Fed boss’s comments come as some economic data have pointed to slower U.S. economic growth, even as a reading for confidence shot higher.

How did stock indexes fare?

In testimony before the Senate Banking Committee on Tuesday, Powell said that “some [economic] data have softened,” of late, helping to justify the central bank’s decision to take a breather from further rate increases.

At the same time, he said “the job market remains strong,” and that “we are seeing signs of stronger wage growth,” a trend that could have some members of the Fed’s interest-rate committee eager to raise rates in an effort to head off any resulting inflation.

Powell’s comments came after the central bank did an about-face, signaling that it intended to moderate its rate-hiking plans after raising interest rates four times in 2018 and reducing its balance sheet by hundreds of billions of dollars. Both moves drew resistance from market participants who worried those actions were tightening financial conditions. On top of that, Powell and his team garnered heavy criticism from President Donald Trump on policy methods perceived as aggressive.

Aside from Powell’s testimony, investors have been focused on U.S.-China trade developments after Trump in recent days indicated that he was willing to extend a March 2 deadline for increasing tariffs on some $200 billion in Chinese goods.

Home-price appreciation also slowed in December to 4.7% annually, down from 5.1% in November, according to the S&P CoreLogic Case-Shiller U.S. National Home Price Index, the slowest pace since August 2015.

Consumer confidence surged in February, rising for the first time in four months, as the Conference Board’s consumer confidence index rose to 131.4, up from 121.7 in January. Economists polled by MarketWatch had forecast a 124.7 reading.

January data on new home sales, originally set to be released Tuesday, will be delayed due to the earlier government shutdown.

The market’s rally in the first months of 2019 is largely due to the Fed’s shift in policy, Craig Callahan founder and president of Icon Advisors, told MarketWatch. “The mystery now is how many inflation hawks are on the Fed board that, despite the lack of inflation, want to push rates higher,” he said.

Shares of Home Depot Inc. HD, +0.07%  fell 0.9% after the home-improvement giant reported quarterly results that were weaker than expectations.

Tesla Inc. TSLA, +0.05% shares slipped 0.3% after chief executive of the electric-car marker, Elon Musk, clashed with the Securities and Exchange Commission over his recent tweets. A federal judge gave Musk two weeks to explain why he shouldn’t be held in contempt of court after a recent tweet drew SEC criticism on Monday.

Caterpillar Inc. CAT, +0.22%  shares dropped 2.6% after the stock was downgraded by UBS. Analyst Steven Fisher cut his rating from buy to sell.

In commodities, oil prices GCJ9, +0.20% traded higher, while the price of gold settled fractionally lower. The U.S. dollar softened against its peers.