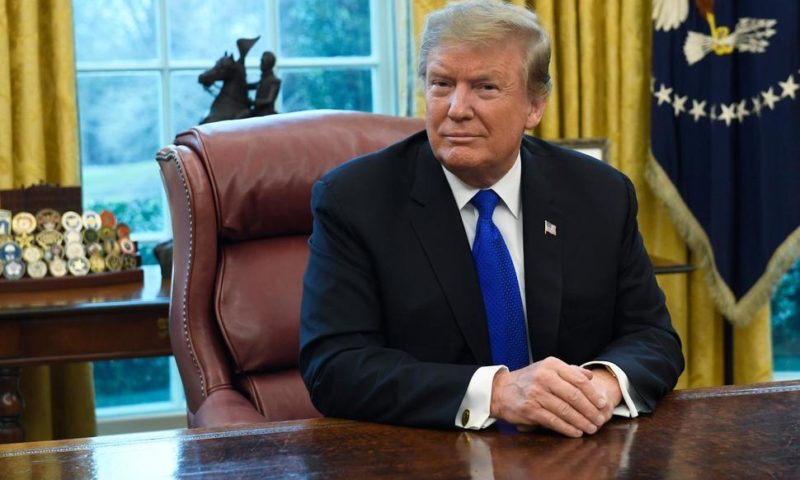 Trump says he will extend a deadline to escalate tariffs on Chinese imports, citing “substantial progress” in weekend talks between the two countries.

Trump tweeted that there had been “productive talks” on some of the difficult issues dividing the U.S. and China, adding that “I will be delaying the U.S. increase in tariffs now scheduled for March 1.”

Trump said that if negotiations progress, he will meet with Chinese President Xi Jinping at his Florida resort to finalize an agreement.

U.S. and Chinese negotiators met through the weekend as they seek to resolve a trade war that’s rattled financial markets.

Trump had warned he would escalate the tariffs he has imposed on $200 billion in Chinese imports, from 10 to 25 percent, if the two sides failed to reach a deal. The increase was scheduled to take effect at 12:01 a.m. EST on March 2.

Speaking to governors gathered at the White House for an annual black-tie ball Sunday, Trump said he was doing “very well” with China.

“If all works well we’re going to have some very big news over the next week or two,” he said, though he took care to add that “we still have a little ways to go.”

The reprieve is likely to be greeted with relief by financial markets.

The world’s two biggest economies have been locked in a conflict over U.S. allegations that China steals technology and forces foreign companies to hand over trade secrets in an aggressive push to challenge American technological dominance.

The two counties have slapped import taxes on hundreds of billions of dollars of each other’s goods. The conflict has unnerved investors and clouded the outlook for the global economy, putting pressure on Trump and Xi to reach a deal.

“Trump clearly wants a deal and so do the Chinese, which certainly raises the probability that the two sides will come to some sort of negotiated agreement, even if it is a partial one, in the coming weeks,” said Cornell University economist Eswar Prasad, former head of the International Monetary Fund’s China division.

On Twitter, Trump said the two sides had made headway on issues including protection of trade secrets, forced technology transfer and U.S. agricultural sales to China. But the administration did not immediately provide details.

Business groups and lawmakers in Congress want to see a comprehensive deal that forces the Chinese to change their behavior and that can be enforced. The U.S. has accused China of failing to meet past commitments to reform its economic policies.

“Encouraging news from @POTUS that progress is being made in a trade deal with China. Hopefully this leads to an agreement that stops China’s theft of US intellectual property and avoids a full blown trade war,” tweeted Republican Sen. Pat Toomey of Pennsylvania

But critics worry that the president has given up leverage. “They now have lost the advantage of a deadline,” said Philip Levy, a senior fellow at the Chicago Council on Global Affairs and a White House economist under President George W. Bush, adding that “I see the odds tilting” in China’s favor.

Premier League race ‘worth hundreds of millions’ to home city