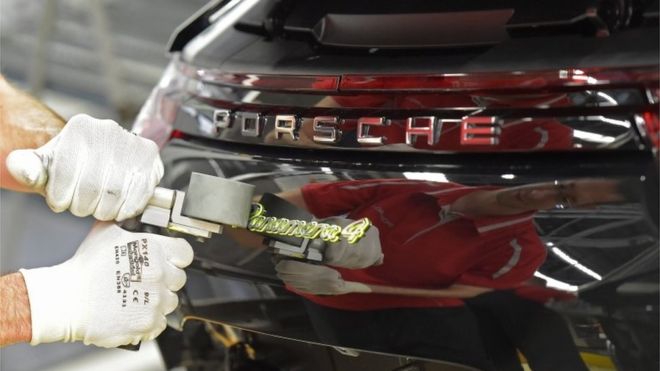 Porsche is warning UK customers they might have to pay 10% extra for cars delivered after Britain leaves the EU.

The German firm wants buyers to sign a clause agreeing to a potential tariff, a move Porsche said is “precautionary”.

Porsche’s owner Volkswagen declined to discuss if some of its other brands, including Audi, Lamborghini, Skoda, Bugatti, Seat, and Ducati might follow.

The company’s Macan sports utility and Boxster models start at about £46,000.

Stuttgart-based Porsche said in an emailed statement to the BBC: “As one potential outcome of the Brexit negotiations, there is a possibility that a duty of up to 10% may be applied to cars imported into the UK by us after March 29.

“In light of this, we have chosen to inform customers whose cars are likely to arrive after Brexit occurs to warn them that they may be affected by this tariff – allowing them to be fully informed at the point of sale and, if they wish, to adjust their order accordingly.

“This is a precautionary step in the interests of allowing our customers to plan ahead.”

Bloomberg quoted Porsche as saying that it needed “comprehensive clarity” on future UK relations with “the EU very quickly”.

Customers who have placed deposits on or before 17 January will not be affected by the change, Porsche said. The company has no UK manufacturing, so all its cars are imported.

Rebecca Chaplin, editor of Car Dealer magazine, which first reported Porsche’s move said it was bad news for industry because it would make buyers want to delay purchases until the picture was clearer after Brexit.

”Car dealers and manufacturers need to be able to communicate the prices of cars clearly to customers – it’s a fundamental of this business and the government isn’t helping them,” she said.

AA president Edmund King said: “Import tariffs alone could push up the list price of cars imported to the UK from the continent by an average of £1,500 if brands and their retail networks were unable to absorb these additional costs.”

Executives at several carmakers have expressed fears about the risk of tariffs, which they say could disrupt production and exports when the UK leaves the EU next month.

Last week, Ford warned that a no-deal Brexit would be “catastrophic”.

On Sunday, a spokesman for Volkswagen declined to discuss a possible surcharge on its other car brands.

But he told the BBC: “We are keeping a very close eye on developments and reviewing the entire spectrum of possible effects.

“We are noting with regret that there is currently a stand-still regarding the decision on the negotiated deal. For us, this means a further period of insecurity and planning uncertainty. We continue to prepare for all eventualities.

“Irrespective of this, the United Kingdom will remain an important market for the Volkswagen Group, the second largest in Europe.”

However, Leave supporters have dismissed fears over tariffs on imported cars, arguing that German manufacturers would oppose such an obstacle to one of their biggest markets.

The UK is one of Porsche’s biggest markets. The company sold 256,000 cars worldwide last year, with more than 12,500 in Britain.