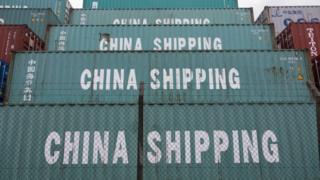 The UK risks “crashing out” of 40 trade agreements spanning five continents in the event of a no-deal Brexit, a business organisation has warned.

The CBI said there were “hugely damaging implications” for the UK if it had to leave trade deals it has through its membership of the European Union.

It said many firms did not know relationships with customers “across the globe” were at risk from a no-deal.

The government said it was “seeking continuity” for free trade deals.

There are 40 existing EU free trade agreements covering more than 70 countries and accounting for about 11% of the UK’s total trade, according to the government.

EU members benefit from arrangements with South Korea, Mexico, Canada and many more.

However, CBI said these were under threat in the event of a an “accidental” no-deal Brexit, which it warned was becoming “more likely”.

“If the UK leaves the EU without a deal, we could cease overnight to enjoy the benefits of tariff-free trade with, and preferential access to, markets of fundamental importance for British products and services, from Japan to Turkey,” said CBI president John Allan.

“Many British firms are unaware that it’s not just their relationships with EU customers at risk from a no-deal Brexit, but relationships across the globe.

“Individual businesses in every corner of the UK that trade with markets outside Europe would have tariffs worth hundreds of millions of pounds slapped on them instantaneously,” he added.

He said this “looming danger” had been widely overlooked and was “yet another reason” why a no-deal was not an option for the UK economy.

‘Ready to go’
In a statement, the Department for International Trade said: “Our priority is to avoid disruption to our global trading relationships as we leave the European Union and we are seeking continuity for existing free trade agreements.

“We will continue to engage with all our trading partners and businesses should continue to plan for a range of Brexit scenarios, including no-deal.”

Last year, the government said it wanted to replicate the EU’s trade agreements “as far as possible” and have them ready to go immediately in the event of a no-deal Brexit.

But last month, International Trade Minister George Hollingbery told the Commons: “There are no deals yet that have been actually signed.”

However, the minister added that he was confident “the majority of those will be in place by 29 March”.