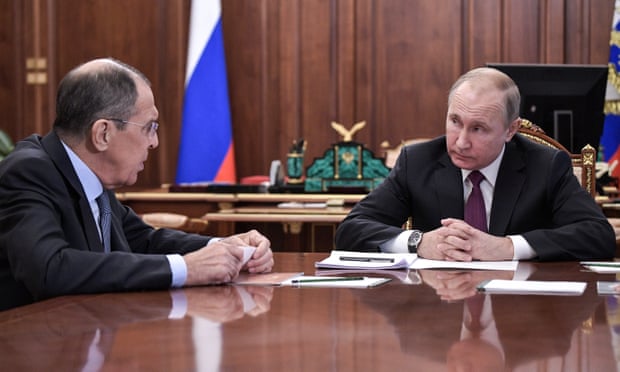 Vladimir Putin has said Russia will suspend its involvement in a cold war-era nuclear pact, following a similar decision by the US, and begin developing new nuclear-capable missiles banned by the treaty.

The move came a day after Donald Trump confirmed the US would exit the intermediate-range nuclear forces (INF) treaty. The US had complained for several years that a Russian cruise missile violated the treaty, a claim that Russia has denied.

The INF treaty, concluded in the final years of the cold war, banned the deployment of short and medium-range missiles up to a range of 5,500km by both countries. The pact is credited with helping to keep nuclear-capable missiles out of Europe.

In remarks on Saturday, Putin said Russia would begin developing new missiles banned by the treaty, including a land-based version of its Kalibr cruise missile, which has been used in naval strikes in Syria, as well as hypersonic weapons.

“Our answer will be mirrored,” Putin said in a meeting with his defence and foreign ministers. He noted the US had suspended the treaty first and had said it would develop new weapons. “They have announced that they will conduct research and development and we will as well.”

Putin said Russia would not begin deploying weapons banned by the INF in Europe unless it sees similar moves by the US.

“Russia will not deploy such a weapon were it to appear, neither in Europe, nor in any other region of the world as long as a similar weapon made by America does not appear there,” Putin said, according to a Kremlin transcript.

In public remarks, he also told his defence minister that Russia would not be drawn into an arms race which would be “expensive for us”, and said that he would not increase Russia’s defence budget to produce the new weapons.