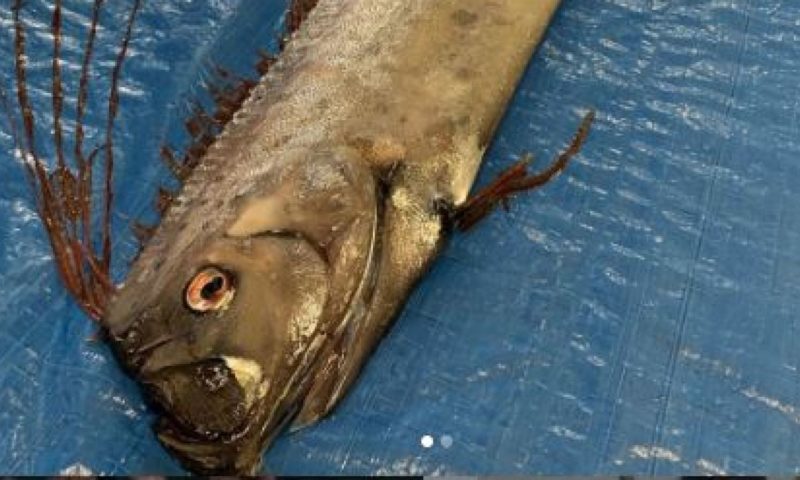 In Japanese mythology oarfish are harbingers of doom which can indicate a natural disaster is about to hit.

Giant deep-sea fish washing up on Japan’s shores has sparked fears of an impending earthquake or tsunami.

Three oarfish have been seen over the past week off the north coast of Japan, bringing the total discovered this season to seven.

The metres long eel-like fish are considered harbingers of doom in Japanese mythology and are known in the country as ryugu no tsukai – or messenger from the sea god’s palace.

Living at depths of 1km (0.62 miles), they are believed to come to the surface ahead of an earthquake or tsunami.

At least a dozen fish were found washed up in 2010 before the 2011 Tohoku earthquake which at a magnitude of nine was one of the biggest recorded in a century, and was followed by a tsunami which killed nearly 19,000 people.

On Friday, two oarfish were found in fishing nets off the northern prefecture of Toyama, nine days after a 3.2m (10.5ft) oarfish washed up on the shore in Toyama Bay.

A four metre-long (13.12ft) oarfish was also found on Monday tangled in a fish net off the port of Imizu.

After the Uozu Aquarium posted pictures of the dead oarfish on Friday, social media users have been speculating their appearance is an omen.

“This is no doubt evidence of a precursor to an earthquake. And if it is in the Nankai Trough, it might be a huge quake,” one Twitter user wrote.

Another said: “Is something happening deep in the sea?”

“What is going on under Toyama Bay,” said a Twitter user.

Hiroyuki Motomura, a Kagoshima University professor of ichthyology – the study of fish – dismissed the concerns, saying he believes the fish rise to the surface when they are in poor physical condition.

“The link to reports of seismic activity goes back many, many years, but there is no scientific evidence of a connection so I don’t think people need to worry,” he added.

Kazusa Saiba, an Uozu Aquarium keeper, told CNN: “There is no scientific evidence at all for the theory that oarfish appear around big quakes. But we cannot 100% deny the possibility.

“It could be that global warming might have an impact on the appearance of oarfish or a reason we’re just not aware of.”