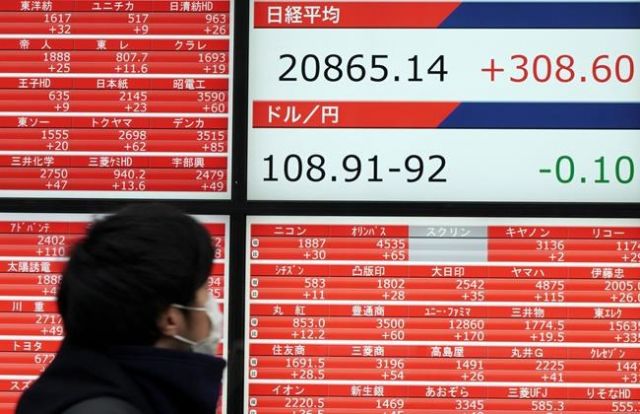 Stock markets mostly rose Thursday after the U.S. Federal Reserve signalled it would be cautious in raising interest rates and as investors monitor U.S-China trade talks. Economic data was mixed, with one survey pointing to improved Chinese manufacturing but another showing a slowdown in eurozone growth.

FED TALK: With pressures on the U.S. economy rising — a global slowdown, a trade war with China, a nervous stock market — the Fed signalled it’s in no hurry to resume raising interest rates. And with inflation remaining tame, the rationale to tighten credit has become less compelling. “The situation calls for patience,” Chairman Jerome Powell said at a news conference. “We have the luxury to be patient.” That has supported investor sentiment as higher rates can weigh on growth.

CHINA MANUFACTURING: An official measure of China’s manufacturing improved in January but forecasters say economic activity is sluggish as Chinese leaders try to resolve a tariff battle with Washington. The purchasing managers’ index issued Thursday by the government statistics agency and an industry group rose 0.1 points on a 100-point scale but stayed below a level that shows activity expanding. Measures for employment and domestic demand weakened. China’s economic growth sank to a three-decade low in 2018 after activity decelerated in the final quarter of the year.

US-CHINA TRADE: Trade talks opened Wednesday between the U.S. and China and will loom over the market for the remainder of the week. The high-level talks are aimed at settling a months’ long trade war that has raised fears of slower economic growth. Industrial and technology companies have warned about slowing sales because of the trade impasse.

ANALYST’S VIEWPOINT: “Today what is most important is that we get day two of the two-day U.S.-China trade talks. Let’s see who folds there. But with the Fed having delivered unto Trump what is Trump’s, and the Dow over 25,000, does he really need that easy deal, or can he let his team push back harder?” Michael Every, a senior strategist for the Asia-Pacific for Rabobank, said in a commentary.

EUROPEAN GROWTH: Investor sentiment was hit in Europe after official data showed the 19-country eurozone economy grew only 0.2 per cent in the fourth quarter from the previous three-month period. Italy fell into recession, darkening the outlook for the country, where the populist government has been in a dispute with EU officials over its spending plans.

EARNINGS: Samsung Electronics Co. said it posted a near-30 per cent drop in operating profit for the last quarter after seeing slowing global demand for its memory chips and smartphones. It still finished the year with record earnings, but Samsung said it expects its overall annual earnings to decline this year. Other companies were more upbeat in Europe: profits rose at consumer goods giant Unilever, oil company Shell and networks maker Nokia.

Italy slips into recession for third time in a decade