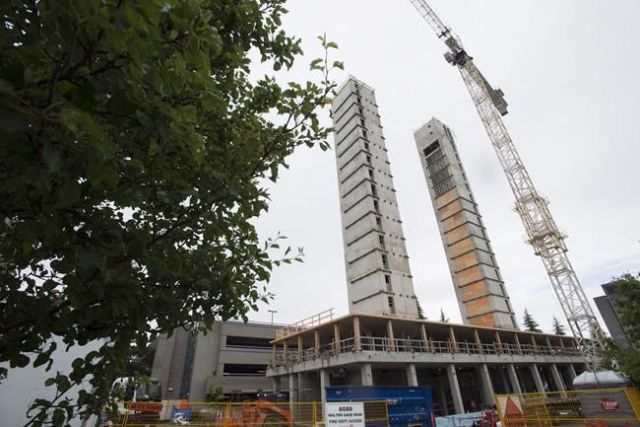 Six years ago architect Michael Green took the stage at a TED conference and called for an global era of wood-framed skyscrapers. Some were skeptical.

“People really thought I was an idiot,” said Green in a recent interview.

“I got constant comments from my peers just saying this guy didn’t know what he was talking about, this will never happen, the construction industry doesn’t change. And look at it now, it’s made a massive amount of change.”

Almost non-existent a decade ago, tall wood buildings have defied skeptics and are sprouting up in cities across Canada as the wood industry sees opportunity, developers embrace new designs and momentum builds to reduce the heavy carbon footprint of concrete and steel in construction as the urgency of the battle to combat climate change grows.

Wood offers the benefit of being made of captured carbon and of reducing the need for concrete, which the International Energy Agency estimates is responsible for seven per cent of global greenhouse gas emissions.

But it was the housing market collapse a decade ago that helped prompt B.C. to start promoting the use of new timber building techniques already being used in Europe in an effort to boost the forestry sector.

The results include the Brock Commons tower on the University of British Columbia campus, the world’s tallest wood building at 18 storeys. The hybrid building has two concrete core pillars, but is still estimated to have captured 1,753 tonnes of carbon in the timber and prevented 679 tonnes of emissions, equivalent to taking more than 500 cars off the road for a year.

Building tall with wood has been made possible thanks to the use of both new and old techniques. Brock Commons used the relatively recent innovation of cross-laminated timber, which involves gluing perpendicular layers of lumber together to create reinforced sheets for the walls and floors. For pillars, it used the much older technique of gluing parallel pieces of lumber together to make thick beams.

Growth in tall wood buildings has been hampered by code limitations, but one-off exemptions mean several others are in the works even as the codes themselves are expected to soon change.

The University of Toronto is embarking on a 14-storey tower and George Brown College plans for a 12-storey building on the city’s waterfront, while developers have already broken ground on the 19-storey Terrace House in Vancouver.

The Toronto Sidewalk Labs development, still in planning stages, claims it will build the “first-ever mass-timber district in the world” at a proposed 306,580 square metres (3.3 million sq. ft) across 12 buildings ranging from three to 30 storeys. There are also a range of mass timber buildings already complete or underway in major Canadian cities that fall under the six-story standard building code.

The building rules could change next year to allow 12-storey towers in the 2020 update of the national building code, which is revised every five years.

Fire chiefs have raised objections to the code changes, saying there still isn’t enough known about fire risks, but Natural Resources Canada senior research adviser Mohammed Mohammed said there has been quite a bit of research.

“In terms of safety, there has been extensive structural and fire-resistance testing that’s been conducted in Canada,” said Mohammed. “I think everything is aligned to target the 2020 edition.”

The thick timber beams act more like logs than kindling, so they resist burning and then char to create an insulating layer before burning at a predictable rate. But as extra precautions, the code updates will require wrapping much of the timber in drywall or cement, which act as both a fire and sound barrier.

Japan’s Sumitomo Group has announced what looks to be the tallest building yet planned with a 70-storey, 350-metre tower, though it’s not planned to be completed until 2042 to commemorate the company’s 350-year history.

China’s slowdown and what it means for the UK