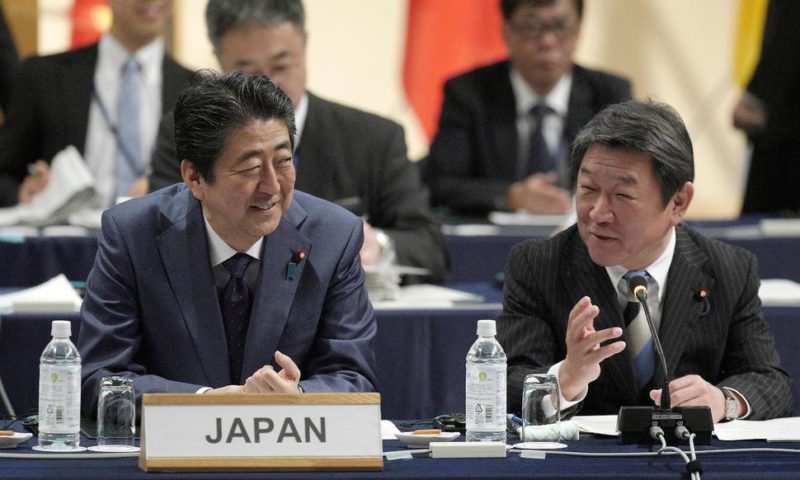 Trade ministers of a Pacific Rim trade bloc have geared up to roll out and expand the market-opening initiative at a meeting in Tokyo, reaffirming their commitment to open and free trade and inviting new membership.

TOKYO — Representatives from a Pacific Rim trade bloc geared up to roll out and expand the market-opening initiative as they met Saturday in Tokyo, reaffirming their commitment to open and free trade and inviting new membership.

The Pacific Rim free trade agreement, rejected by President Donald Trump after he took office in 2017, took effect at the end of last year after Australia became the sixth nation to ratify it. So far, seven of the 11 member countries have done so, and the others are expected to follow through soon.

Known as the Comprehensive and Progressive Trans-Pacific Partnership, the agreement aims to streamline trade and slash tariffs to facilitate more business among member nations with a combined population of nearly 500 million and GDP of $13.5 trillion.

The trade officials at the meeting in Japan’s capital reaffirmed the importance to promote free trade and economic integration in the Asia-Pacific region and beyond, said Japanese Economy Minister Toshimitsu Motegi, who chaired the gathering.

The 11 nations remaining after the U.S. withdrawal amended the pact to enable it to take effect even without Washington’s participation. Vietnam, Canada, Mexico and Singapore also have ratified it. Peru, Chile, Brunei and Malaysia have not yet done so and were encouraged at the meeting to push forward the process.

“Amid growing concerns over recent trends toward protectionism, the ministers shared the view that it is of paramount importance to maintain and further strengthen the principles of an effective, open, inclusive and rules-based trading system,” Motegi said, reading from a joint statement.

In his opening statement earlier at the meeting, Japanese Prime Minister Shinzo Abe praised the 11 ministers for achieving the trade bloc at a difficult time for supporters of the free trade system amid rapid change in the increasingly globalized economy, causing concerns and frustration about the existing system and triggering trade disputes.

“We should not turn the clock backward. … We need to squarely face any worries and anxieties and achieve fair regulation so as to further develop free trade. TPP is at the forefront of that movement,” Abe said. “The door is always open to those who share our vision, and those who accept TPP’s high standards.”

The U.S. departure was a huge loss given the size of the American market. But others, including Taiwan, are reportedly interested in joining the trade deal, seen as a first step toward a pan-Pacific free trade zone.

Trump said he was putting “America first” in seeking bilateral deals rather than broader ones like the Trans-Pacific Partnership — the trading group’s original name. Members are still hopeful the U.S. might eventually rejoin.

“We welcome new participation of as many countries and regions as possible, including the United States,” Motegi said.

For now, nearly two dozen stipulations sought by the U.S. in the original deal reportedly have been shelved after Washington withdrew, watering down the plan proclaimed by the previous administration of President Barack Obama as being the “gold standard” for 21st century trade rules.

Separate efforts are underway to forge a free trade arrangement within Asia called the Regional Comprehensive Economic Partnership, which encompasses the 10 members of the Association of Southeast Asian Nations plus Japan, South Korea, Australia, New Zealand, India and China, but not the United States.

Products Made of Threatened African Wildlife Sold at US Expo