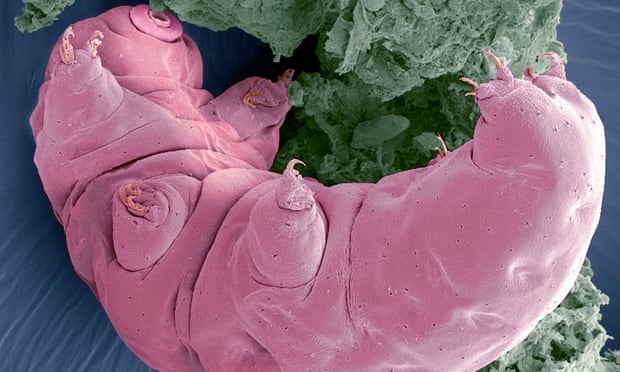 Scientists have found the remains of tiny, ancient animals in an Antarctic lake that has lain undisturbed for thousands of years beneath a kilometre-thick slab of ice.

The surprise haul of dead crustaceans and tardigrades, also known as “water bears” or “moss piglets”, was made by US researchers on a rare mission to drill into the Mercer subglacial lake which lies nearly 400 miles from the south pole.

David Harwood, a researcher at the University of Nebraska-Lincoln and a member of the Salsa (Subglacial Antarctic Lakes Scientific Access) expedition, told the journal Nature that finding carcasses of the small animals – they range in size from 0.1mm to 1.5mm – was “fully unexpected”.

Scientists made the discovery when they inspected mud scraped off an instrument they had lowered into the lake’s icy waters. As expected, the mud contained remnants of photosynthetic algae that lived and died in the area millions of years ago when Antarctica was much warmer.

But the mud also contained the bodies of other, more recent creatures. Researchers found eight-legged tardigrades, the speckled shell of a shrimp-like crustacean with legs dangling from it, and a second shell still bristling with delicate hairs. What at first looked like worms in the mud turned out to be the tendrils of a plant or fungus.

Aware that the creatures might have contaminated other equipment, the scientists cleaned their kit and lowered it into the lake once more. When they hoisted it up and analysed the mud a second time, they found more of the same remains.

It is not clear how the organisms came to be in the ice-covered lake, but scientists believe that they may have lived in nearby ponds and streams during warm periods when the glaciers retreated either 10,000 or 120,000 years ago.

One possibility is that the creatures washed into the lake through rivers under the ice. Alternatively, they may have been carried in after becoming stuck to the underside of an encroaching glacier.

Martin Siegert, co-director of the Grantham Institute for Climate Change at Imperial College and head of the Lake Ellsworth Consortium, a UK project that aims to explore a subglacial lake under the ice of west Antarctica, said it was “a lovely finding”.

He said: “It hints that life may exist in more complex forms than thought previously underneath the massive ice sheet in Antarctica.”

Siegert said more work was needed to establish whether the organisms had been flushed into the lake from upstream – suggesting there was life under the middle of the Antarctic ice sheet – or from the sea, or by some other route. “Each of these would be intriguing,” he said.

Sandra McInnes, an expert in tardigrades at the British Antarctic Survey, said: “If they can get DNA out of these remains, that would be fantastic.”

If the tardigrade DNA perfectly matches that of species alive today, then scientists will suspect the animal was carried into the lake on contaminated drill equipment.

But the DNA may be far older and indicate an ancient relative of a modern species. Genetic analysis might also confirm whether it was a marine or terrestrial creature, McInnes said.

So far, nothing has been pulled alive from the Mercer subglacial lake. With so much ice overhead, too little light may reach the water to sustain organisms such as photosynthetic algae.

But Byron Adams, a researcher at Brigham Young University in Provo, Utah, told Nature that he still hoped to find something that had set up home in the lake. “It’s possible that you could still find things that are alive,” he said.