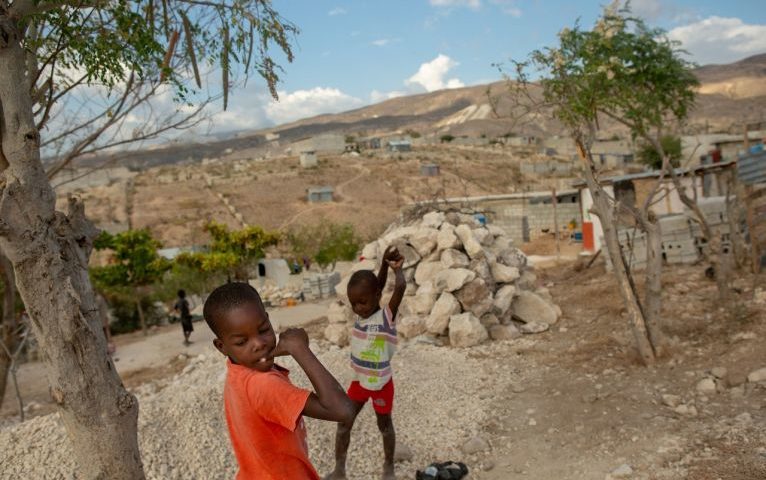 Can cities function without a government? In Canaan, Haiti, residents give it a try.

CANAAN, HAITI — NINE years ago, Canaan 1 was little more than a hilly swath of land patchworked by boulders and cinder blocks marking where people hoped to one day see proper houses, a hospital, a school, a police station and a basketball court. The land was so rocky that only motorcycles, trucks and the rare four-wheel-drive vehicle could pass.

Today, the neighborhood is one of many rapidly expanding areas of Canaan, Haiti’s newest city – named for the biblical promised land – home to between 280,000 and 320,000 people. Soda stands, two-story houses and hardware stores line many of the dirt roads, and a handful of public plazas dot the city. The crown jewel of the Canaan 1 zone is a beautifully painted public plaza complete with benches, a table for playing checkers – and the basketball court residents had hoped for.

“We wanted to show the state who we are – that we can put down more than just one or two dollars here,” says Evenson Louis, a smiling man with a soft voice and big plans asa member of Canaan’s informal city council.

But what the city doesn’t have is running water, legally wired electricity or many of the other basic amenities cities in Haiti offer. That’s because, since the city’s inception as a haven for people who were displaced by Haiti’s 2010 earthquake, its residents have been largely left to themselves.

It Started With Disaster

Canaan can trace its beginning to Jan. 12, 2010, when a magnitude 7.0 earthquake struck Haiti, killing as many as 316,000 people and leaving 1.4 million Haitians homeless. In the aftermath, Haiti’s government, the U.S. Central Command, the United Nations and a nongovernmental organization founded by actor Sean Penn constructed about 2,000 houses on a piece of vacant land just 10 miles north of downtown Port-au-Prince to resettle people who had been squatting on Penn’s golf course.

“Since we got electricity, everything has changed,” says Louis, a former truck loader who moved his family to Canaan a few months after the 2010 earthquake destroyed their home. At night, “kids can do their homework now. If you want to drink cold water, you can!”

To officially establish Canaan as an independent city would require the cooperation of adjacent municipalities. Three are already competing for control over parts of Canaan, which would allow them to tax home and business owners there. Workers from these municipalities have walked around collecting “taxes” without offering much in the way of services in return. On occasion, police officers from neighboring jurisdictions have entered Canaan to make arrests.

But Haiti’s Ministry of Interior, which ultimately has the power to grant Canaan autonomy, hasn’t yet done so. (The Ministry did not respond to requests for an interview.)

It was only last year that Haiti’s central government helped construct Canaan’s first paved road, including one small though important bridge that allowed it to pass over a ravine, as well as its first public school, according to Jacques Bien-Aime, an engineer in charge of relocating internally displaced persons for Haiti’s federal post-earthquake reconstruction office.

The government also helped pump running water to a handful of access points in a few parts of the city and is installing 100 small, concrete markers throughout Canaan to delineate where future roads should be built and to keep people from encroaching upon them – making official the work that residents, including Louis, have been doing unofficially for nearly a decade. While the government has plans for more than a hundred miles of paved roads, just 1.5 miles have been completed so far.

In December, Haiti’s government inaugurated a series of small police posts in and around the city, but some remain unstaffed. Last year there were just 14 police officers stationed in Canaan, serving the city’s thousands of residents. They don’t work inside the city so much as at its periphery, checking to make sure drivers on the national highway at the edge of town have licenses and papers.

In 2016 the country’s government in cooperation with various nongovernmental organizations and international agencies created a master plan for Canaan – a sort of pie-in-the-sky vision for infrastructure, utilities and other services.

“But we don’t have a lot of money to implement the master plan,” Bien-Aime says. “So we have to be strategic.” He admits that Haiti’s president and Parliament haven’t budgeted anywhere near the amount of money it would take to realize its dream for Canaan.

“The problem is, in Canaan, the population is growing so fast in comparison to the government. The state comes slowly behind it,” Bien-Aime says. “We cannot control the migration here. This is the problem. Everyday we have people going here. The informal is the reality.”

Cities naturally become more difficult to govern as they grow, and Canaan may be one of the largest ungoverned urban spaces in the world. Residents have attempted to solve that problem by governing locally: They’ve formed dozens, perhaps hundreds, of local committees where they make decisions about urban planning and even settle disputes. Indeed, many of its residents talk about Canaan not as one single city, but as a collection of different sectors or zones that happen to be next to one another.

Some committees are work groups, like the team of men in the city’s eastern, Onaville neighborhood who volunteer after church each Sunday to help construct houses for their neighbors.

Other groups focus on keeping the peace. In Canaan 1, Louis convenes meetings where community members discuss ways to keep their neighborhood safe. “We don’t want people to be afraid to visit here, like they are afraid in Port-au-Prince,” he says.

Last July, demonstrations erupted across Port-au-Prince after the government reduced subsidies for gas. Fearful that the burning tires, roadblocks and disorder that came with it might spill over into Canaan, residents of Canaan’s Onaville district formed a kind of unarmed vigilante team.

Each night they would place boulders, fallen trees or other obstacles at the entrance of the streets leading into Onaville and station guards there to interrogate anyone who approached, asking where they were going and who they were going to see. Then, they’d call those people to make sure the visitor was welcome.

Peter Leeson, a professor at George Mason University who has researched ungoverned and self-governed places, says this kind of community organizing may in fact be precisely why everyday life in Canaan functions as well as it does. He says Canaan may offer a lesson for other ungoverned urban places: that in order to grow big, you may need to think small.

“Two hundred thousand people in a room trying to decide where to lay a pipe becomes problematic very fast,” Leeson says. “But a whole bunch of groups of 20 is more manageable.”

Self-government on a city scale is not a new phenomenon. In Trujillo, Peru, for example, “authorities have had to deal with informal occupations” since the 1990s, says Martim Smolka, director of the Latin America and the Caribbean Program at the Lincoln Institute of Land Policy, a think tank in Massachusetts. “Since they didn’t have the money to provide all the infrastructure and services that were needed to better house people, they simply said, ‘Well if you want to occupy the land informally, at least occupy according to a grid.’ That way even if its completely informal, later it makes it easier to provide services.”

Gurgaon, India, is another example. It grew from a small industrial town into a mecca for major international companies including Google, General Electric Co. and IBM in just a few decades in part due to a 1977 law that allowed private companies to obtain vast stretches of land – similar to how government’s like Haiti’s typically use eminent domain. As companies flocked to the area just outside of New Delhi, India’s capital, the population rose, and residents needed services – water, sewage management, schools. But unlike Haiti, India has a robust private sector which beat the government to the job of providing these services.

In Haiti, Canaan’s residents say they want a formal connection with the state, and they long for the services that come along with it. Haiti’s government “should provide roads, electricity, water for drinking,” says Louis. “It’s the state that is responsible. But they don’t come.”

Leeson, of George Mason University, says the disconnect from the government may be a silver lining for Canaan. Haiti ranks 157th on Transparency International’s index of 180 countries, making it one of the most-corrupt governments in the world.

“A lot of time the stuff a government does is actually predatory,” he says. “The reason that poor countries in the world are poor is that governments use the authority they have not to help people, but to extort them.”

But absent the state, many challenges remain.

“Women here have many difficulties,” says Cliene Joseph, a mother and community leader in Canaan’s Onaville neighborhood. Opportunities to earn money in Canaan itself are hard to come by, and the sheer scale of the city also poses barriers to education.

“Your kids sometimes have to go far to school,” Joseph says. “When I got to this zone, there was no school, and I felt sad. I didn’t want my kids to have to risk going out on the road – those dangerous trucks.”

So she started a school of her own.

Combating crime is another challenge. Though some parts of Canaan have seen violent incidents in recent months, including the deadly shooting of a police officer and several other, gun- and possibly gang-related crimes, most of Canaan remains peaceful compared to many parts of Port-au-Prince.

This isn’t surprising to Leeson. His research suggests that ungoverned communities often have remarkably low levels of crime, possibly because where laws don’t exist or aren’t enforced, norms still do.

“People know without a law that you’re not supposed to punch someone in the face and take their wallet,” Leeson says. “You don’t need a Congress to pass a law to know that, because no society can function where anyone can punch you in your face and take your wallet.”

For his part, Louis is proud of the relative peace he believes exists in his part of the city.

“We’re not living in chaos,” he says.