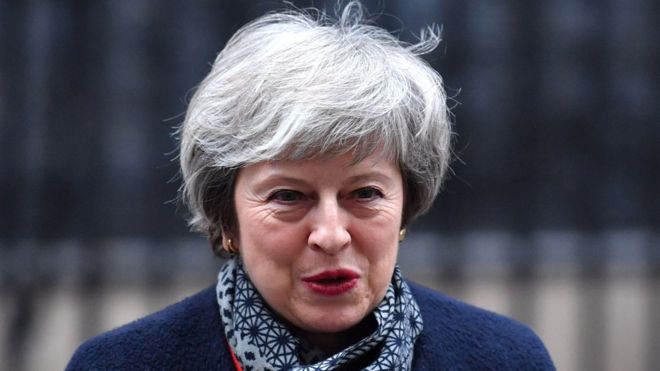 A failure to deliver Brexit would be “a catastrophic and unforgivable breach of trust in our democracy”, Prime Minister Theresa May has warned.

Writing in the Sunday Express, Mrs May pleaded with MPs to back her Brexit deal in Tuesday’s crunch Commons vote.

Not doing so risks the UK leaving the EU with no deal or Brexit not happening at all, she said.

Meanwhile, No 10 is said to be alarmed at the prospect of MPs taking control of Brexit if Tuesday’s vote is lost.

The Sunday Times is reporting a plan by a cross-party group of MPs to change Commons rules to enable backbench motions to take precedence over government business if Mrs May’s deal fails.

This would give MPs, rather than ministers, control of parliamentary business and sideline the prime minister.

One possibility is that backbenchers could then legally compel the government to delay Brexit beyond the set departure date – a proposal some MPs have already called for, says BBC political correspondent Chris Mason.

It was previously thought only ministers could extend the two-year Article 50 process, which governs how a member state leaves the EU.

The UK is due to leave the EU on 29 March 2019 automatically, whether the deal is passed by MPs or not.

Dominic Grieve, who has been at the forefront of cross-party efforts to ensure MPs have a say in what happens if Mrs May’s deal is voted down, told the BBC that reports that he was plotting with Commons speaker John Bercow were “rubbish”.

Mr Grieve, a former attorney general, told the BBC he did meet Mr Bercow on Tuesday but they had not been plotting Wednesday’s events, when Mr Bercow broke with precedent to allow a vote on Mr Grieve’s amendment that led to a government defeat.

How could MPs take over Brexit?

Currently, the government has precedence in the House of Commons. It controls how and when business, including legislation, is organised.

However, some backbenchers are seeking to wrest that control away from them.

If MPs can get an amendment to change how and when Commons business is arranged passed by a majority, backbench business could then take precedence over government business.

This could represent a threat not just to Brexit legislation but to the government’s ability to govern, says Downing Street.

It would mean that without control over time in the Commons, the government has no control over parliamentary business, so cannot get through policies and legislation easily.

In terms of Brexit, it means MPs could block a no-deal by making it a legally binding requirement for government to stop Brexit on 29 March.

Writing in the Sunday Express, Mrs May said the Commons vote on her Brexit withdrawal deal would be the “biggest and most important decision that any MP of our generation will be asked to make”.

The PM is widely expected to lose the vote on the withdrawal agreement she reached with the European Union, something some ministers have said will lead to Brexit “paralysis”.

Addressing the paper’s readers, Mrs May said: “When you turned out to vote in the referendum, you did so because you wanted your voice to be heard.

“Some of you put your trust in the political process for the first time in decades. We cannot – and must not – let you down.

“Doing so would be a catastrophic and unforgivable breach of trust in our democracy.

“So my message to Parliament this weekend is simple: It is time to forget the games and do what is right for our country.”

Former prime minister Sir John Major has said revoking Article 50 is the “only sensible course” to take – but accepted this would be “politically uncomfortable”.

Sir John, who led the country between 1990 and 1997, wrote in the Sunday Times of his support for a second vote on the UK’s membership of the EU, adding it would be “morally reprehensible” for the government to allow the UK to leave without a deal.

“The cost to our national wellbeing would be heavy and long-lasting. The benefits are close to zero. Every single household – rich or poor – would be worse off for many years to come. Jumping off a cliff never has a happy ending,” he wrote.

Meanwhile, Labour’s London Mayor Sadiq Khan has suggested that Mrs May should step down and call a general election if she loses Tuesday’s vote.

Writing in the Observer, he said: “If our government and parliament are incapable of finding a way out of this mess, it should be taken out of the hands of the politicians and returned to the British people to take back control.”

He said should Mrs May lose the vote on Tuesday, negotiations with the EU should continue, but if “EU intransigence persists”, the UK must be willing to leave the EU at the end of March on World Trade Organisation terms.

“We’d be in a stronger position then, to continue the negotiations as an independent third country,” he said.

On Monday the debate on the meaningful vote on Mrs May’s deal will resume for a fourth day.

The vote had been scheduled to take place in December but was called off at the last minute by the prime minister, who was facing almost certain defeat.

Last week the government was defeated twice in the Commons on Brexit votes.

In the first, MPs backed an amendment aimed at making it more difficult to leave the EU without a deal.

While in the second they voted for the government to come back to the Commons with a plan B for Brexit within three days should it lose Tuesday’s vote.

More than 100 Conservatives and 10 DUP MPs are among those set to oppose the government’s deal on Tuesday.

Labour is also set to vote against the deal, but leader Jeremy Corbyn has resisted growing calls from within his own party to get behind another EU referendum, insisting a general election is still his top priority if the deal is rejected.