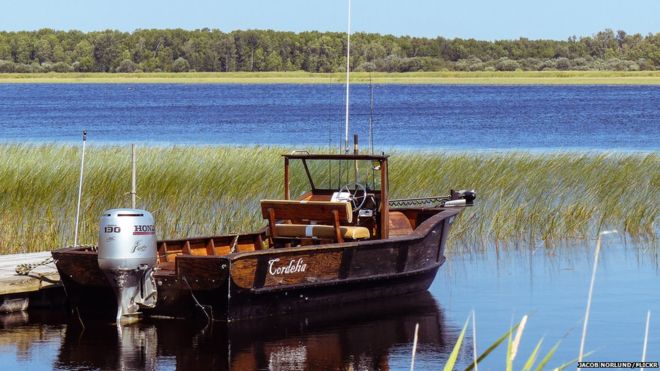 It’s a geographic curiosity – a bit of US land at the top edge of Minnesota, disconnected from the rest of the state.

The Northwest Angle is known to local residents, people who love to fish – the region is famous for its walleye – and geography buffs.

It is accessible by land only through the Canadian province.

Now, someone has anonymously launched a petition urging the US to hand the land over to its northern neighbours.

“Make America great by correcting this critical survey error,” states the petition posted on 30 December on the White House “We the People” site, which allows citizens to petition Congress on issues that matter to them.

The petition is titled “Give Canada back the Northwest Angle located in Manitoba”.

The nub of Minnesota state is roughly 123 square miles (318 square km) and is farther north than any other part of the contiguous United States.

Much of the land is owned by the Native American Red Lake Nation of the Chippewa tribe.

Living above the 49th parallel, Angleites – as local residents are known – are the northernmost American citizens, barring Alaskans. It can be reached by driving through Canada or by boat across the Lake of the Woods.

The protrusion of land is due to a historic mapping mistake.

When the American Revolutionary War ended with the Treaty of Paris in 1783, Britain and the US agreed on the new border based on a map maker’s error about the source of the Mississippi River, which was used to help draw the boundary.

The boundary line was redrawn in 1818 to address the snafu, shaping the Northwest Angle.

So far, the petition is just shy of 3,500 signatures, a far cry from the 100,000 signatures needed to get a response from the White House.

And at this point, the effort is being greeted with something of a shrug by Angleites.

Lisa Goulet, who owns Angle Outpost Resort with her family, told the BBC that while it’s a fun story, when she came across the petition she “didn’t really give it another thought”.

She says the roughly 100 residents are on “absolutely nothing but friendly terms” with their Canadian neighbours – but she isn’t about to add her signature to the petition.

“We understand it was a mistake, that it wasn’t on purpose that the United States or that Minnesota was gifted this area, but we are blessed and so grateful for this area and we don’t take it for granted,” she said.

“So it’s not like we’re just willing to say ‘Oh, right, you can have it back’, because it’s our home.”

It’s not the first time the threats of secession has been raised. Some residents brought up the idea in the late 1990s during some tension between Canada and the US over fishing regulations, though the two countries eventually came to an agreement.

Ms Goulet is happy her remote corner of the world is getting some attention and says she’s is proud to hail from the Northwest Angle.

She calls it “a conversation starter”.