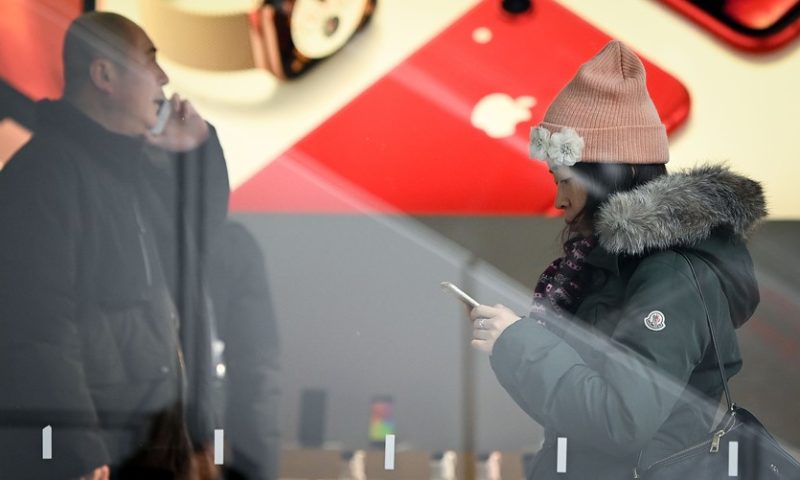 U.S. stocks closed down Thursday, with the Dow Jones Industrial Average sinking more than 600 points as Apple Inc. posted its biggest percentage drop since 2013 while investors reacted badly to a weaker-than-expected reading on manufacturing activity.

Thursday’s swoon translated to the worst start to a year for both the S&P 500 and the Dow since 2000, while for Nasdaq it was the weakest start since 2005.

Apple AAPL, -9.96% slashed its quarterly revenue forecast for the first time in more than 15 years Wednesday evening, in a move that the iPhone maker’s chief executive, Tim Cook, said was prompted by signs of weakness in the world’s second-largest economy — China.

The announcement by Apple comes as investors are wrestling with worries that a protracted tariff dispute between Washington and Beijing is starting to hurt some of the biggest and most influential U.S. companies, threatening the growth outlook and a longstanding bull market that already appears in tatters.

Fragile sentiment was further battered after a survey from the Institute for Supply Management showed U.S. manufacturing growing at the slowest pace in two years, intensifying concerns among investors that the U.S. economy is running out of steam along with other large economies in Asia and Europe.

Apple’s announcement and the ISM report follow fresh signs of Chinese economic weakness after Beijing’s official manufacturing reading for December showed a more severe drop than one issued earlier, reflecting a fall to the weakest level since February 2016.

Investors also remain focused on the Federal Reserve and its interest-rate policy in 2019, ahead of Friday morning’s employment situation report. The jobs numbers will be a key data point for Fed officials, as they try to determine whether the economy is healthy enough for further rate increases this year, after raising rates four times in 2018.

At its most recent meeting in December, the median forecast by members of the central bank’s interest-rate-setting committee predicted two more rate increases in 2019, but investors are predicting a more than 71.6% probability that the central bank stays pat this year, according to CME Group data, while Dallas Fed President Robert Kaplan advocated for a pause in interest-rate increases during a Thursday-morning interview on Bloomberg Television.

The ISM Manufacturing survey data “are clearly showing the hesitancy of businesses to spend and invest given the macro headwinds facing the economy, with the biggest issue being trade,” Yousef Abbasi, global market strategist with INTL FCStone told MarketWatch.

“We ended 2018 with worries about growth and earnings, and in the first two days of 2019 we’ve received more bad Chinese data and an AAPL revenue guidance cut,” Tom Essaye, president of the Sevens Report, wrote in a note to clients.

“Neither of those events should be material surprises — China’s been weak for a while and analysts have been cutting estimates on Apple for months — but if we’re going to sustain a rally, this market needs actual good news, and there hasn’t been much lately,” he said.

Shares of Delta Air Lines Inc. DAL, -8.94% were down 8.9% after the company said revenue in December was lower than expected.