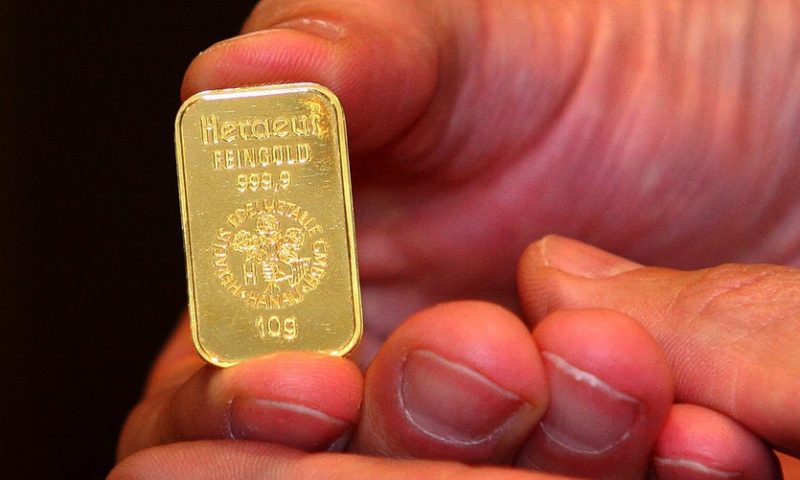 The gold market closed at 12:30 p.m. Eastern Time, an hour earlier on the day ahead of the Christmas holiday closure. Stocks also closed early.

Risk assets traded calmly at first, but downside momentum built throughout trading, amid concerns for global trade, a slowing economy accompanied by higher interest rates and after a weekend of news on White House tension over the Federal Reserve. Reports brought heightened attention to President Trump’s ire over rising interest rates, but his realization, according to top aides, that he can’t remove Fed Chairman Jerome Powell simply over policy disagreement.

Separately, Treasury Secretary Steven Mnuchin issued a statement from his holiday vacation, talking about credit market stability after a round of calls to big banks. Market analysts said the statement risked rattling confidence over liquidity when there had been little immediate concern, even if the move was intended to shore up confidence after last week’s battering on Wall Street, the worst since the financial crisis a decade ago.

“I think we are still very much on track to touch the year-end target of $1,275 [for gold] and the continuing situation in the U.S. can easily lead us there,” said Naeem Aslam, chief market analyst with Think Markets UK. “Any weakness in the stock markets would fuel the current rally.”

The ICE U.S. dollar index DXY, -0.41%  fell 0.4%, a move that typically makes dollar-priced gold more attractive to investors using another currency. The S&P 500 SPX, -2.71%  fell 2.7%, the first Christmas Eve that the broad-market benchmark has booked a loss of 1% or greater — ever. The Dow industrials and the Nasdaq didn’t fare any better.

Though gold prices, based on the most-active contracts, have strengthened in recent months to trade more than 5% higher quarter to date, they have still lost nearly 4% for the year so far. Quarter to date, gold has outperformed the S&P 500SPX, -2.71% with the benchmark stock index down roughly 16% from the end of September.

Equities Average Share Of Portfolios Tells Us: Not A Bright Future For U.S. Stocks