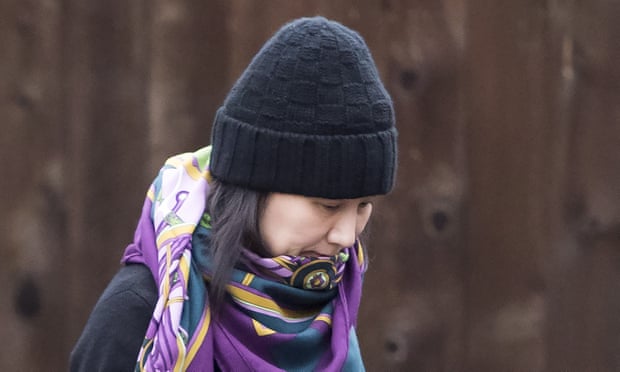 US, UK and EU express support, after two Canadians held in seeming retaliation for arrest of Huawei executive

Canada has made its first formal demand for China to immediately release two citizens who have been detained in apparent retaliation for the arrest of a top Chinese tech executive.

The US, the UK and the EU also issued statements in support of Canada, which has abandoned previous diplomatic caution to demand the men are freed.

“We are deeply concerned by the arbitrary detention by Chinese authorities of two Canadians earlier this month and call for their immediate release,” Canadian foreign minister Chrystia Freeland said.

A senior government official said China’s ambassador to Canada was called on Friday and told of Canada’s demand. The official spoke on condition of anonymity because of lack of authorisation to discuss the call publicly.

Meng Wanzhou, chief financial officer of Chinese telecommunications giant Huawei, was arrested in Canada on 1 December at the request of the United States, which wants her extradited to face charges that she and her company misled banks about the company’s business dealings in Iran.

Freeland’s declaration marked a harder tone from Canadian officials. Prime Minister Justin Trudeau had been criticised by the opposition for what they called unacceptable reticence over his suggestion on Wednesday that raising demands for their release would be akin to “to stomping on the table” without achieving their release.Advertisement

Freeland said Canada is honouring its extradition treaty with the US and said it is conducting a fair and transparent legal proceeding with respect to Meng.

“We also express our deep concern for the Chinese government’s detention of two Canadians earlier this month and call for their immediate release,” Palladino said. US secretary of state Mike Pompeo also called for their release last week.

UK foreign secretary Jeremy Hunt said in a statement the UK is confident Canada is respecting its extradition treaty with the US and that he is “deeply concerned” China may have detained the two Canadians for political reasons.

The EU, meanwhile, issued a statement saying, “The declared motive for the arrest and detention of Michael Kovrig and Michael Spavor, both Canadian nationals, raises concerns about legitimate research and business practices in China.”

Freeland thanked allies for speaking out and said Canada will not compromise or nor politicise the rule of law. “It is the bedrock of democracy,” she said.

The show of support from allies is significant for Canada, which has felt relatively isolated in recent months, particularly following US President Donald Trump’s criticism of Trudeau and his lack of public support.

In August, Saudi Arabia expelled Canada’s ambassador to the kingdom and withdrew its own ambassador after Canada’s foreign ministry tweeted support for an arrested Saudi activist. The Saudis also sold Canadian investments and ordered their citizens studying in Canada to leave.

No country, including the US, spoke out publicly in support of Canada, and the Trump administration has been steadfast in its support for Saudi Arabia.

The US Justice Department said on Friday a Chinese national had been arrested for stealing trade secrets from a US-based petroleum company, his employer, related to a product worth more than $1 billion.

The department alleged Hongjin Tan downloaded hundreds of files related to the manufacture of a “research and development downstream energy market product,” which he planned to use to benefit a company in China that had offered him a job. He was arrested on Thursday in Oklahoma and will next appear in court on Wednesday, the department said.

US shutdown looks set to drag through Christmas