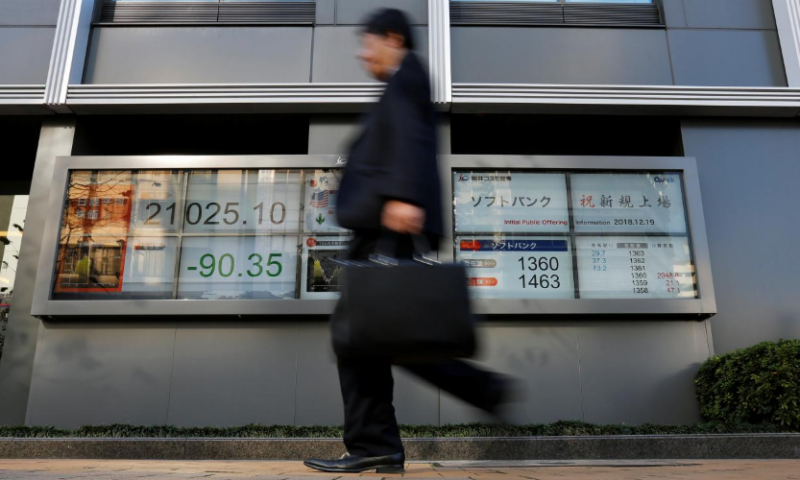 LONDON – World stocks extended a steep sell-off on Friday as the threat of a U.S. government shutdown and further hikes in U.S. borrowing costs compounded investor anxieties over the trajectory of global economic growth.

E-Mini futures for the S&P 500 were off half a percent, indicating a lower open on Wall Street. Nasdaq futures were down 0.6 percent.

European shares traded in negative territory, following in the footsteps of U.S. and Asian markets. The pan-European STOXX 600 fell over half a percent, continuing its slide towards lows not seen since the end of 2016.

It had last pared some losses to trade 0.2 percent lower. [.EU]

Most European bourses and industry indexes were in the red after the S&P 500 fell overnight, heading for its worst quarter since the dark days of the financial crisis in late 2008, with a loss of 15 percent so far. The Nasdaq has shed 19.5 percent from its August peak, just shy of confirming a bear market.

Oil prices, which slid just over 4 percent on Thursday, tumbled to their lowest since the third quarter of 2017 on Friday. The dollar, which had suffered its biggest one-day drop on the yen since November 2017 on Thursday, lost a further 0.1 percent against the yen.

“China is cooling and the euro zone is slowing down, and some of the economic indicators from the U.S. have been a bit soft recently, but yet the Fed hiked rates and suggested that two more interest rate hikes were lined up for 2019,” said Michael Hewson, chief markets analyst at CMC Markets in London.

He said speculation the U.S. economy could be headed for a recession has picked up, dampening global sentiment. “Fear about a U.S. government shutdown is playing into the mix too.”

Eyes will be on U.S. inflation numbers due at 1330 GMT on Friday, which include the Federal Reserve’s preferred measure of core inflation.

The MSCI All-Country World index, which tracks shares in 47 countries, was down 0.2 percent on the day. It was set for its worst week since March.

Japan’s Nikkei lost 1.1 percent to close at its lowest since mid-September last year, after giving up 5.6 percent this week. Australian stocks slipped 0.7 percent, hovering just above a two-year trough hit earlier in the session.

Chinese blue chips lost 1.4 percent, in part after the United States accused Beijing of orchestrating the hacking of government agencies and companies around the world.

Sentiment had turned sour on Thursday when the U.S. Federal Reserve largely retained plans to increase interest rates despite mounting risks to growth.

Markets were further spooked when U.S. President Donald Trump refused to sign legislation to fund the U.S. government unless he received money for a border wall, thus risking a partial federal shutdown on Saturday.

“Friday will be a tense day in Washington, and for financial markets, as a last-minute compromise is sought.”

Adding to the air of crisis was news U.S. Defense Secretary Jim Mattis had resigned after Trump announced a withdrawal of all U.S. forces from Syria and sources said a military pullback from Afghanistan was on the cards.

STAMPEDE FOR THE EXITS

The mood change has triggered a rush out of crowded trades, including massive long positions in U.S. equities and the dollar and short positions in Treasuries.

Lipper data on Thursday showed investors pulled nearly $34.6 billion out of stock funds in the latest week and were heading for the biggest month of net withdrawals on record.

There was also a sense of capitulation in currency markets as the dollar dived 1.1 percent on the yen on Thursday to hit a three-month trough at 110.80. It was last changing hands at 111.16 having shattered several layers of chart support.

The euro dipped 0.2 percent to $1.1420, having jumped to its highest in over six weeks at $1.1485. Against a basket of currencies the dollar regained lost ground, up 0.3 percent at 96.563 after suffering its largest single-session fall in two months.

Yields on the 10-year U.S. Treasury were back up to 2.792 percent after hitting their lowest since early April at 2.748 percent on Thursday’s bid to safety. As recently as October, they had been at a seven-year top of 3.261 percent.

The gap between two- and 10-year yields was back up to just 12.8 basis points, after flattening to 9 basis points overnight.

The rally in longer-dated bonds has been fueled by the huge slide in oil prices, which will pile downward pressure on inflation at a time when the global economy is already slowing.

Both Brent and U.S. crude futures reached their lowest in more than a year overnight, but edged higher on Friday on talk that production cuts by OPEC might be larger than first thought.

‘Alone in the world’: Canada squeezed by superpowers in Huawei dispute