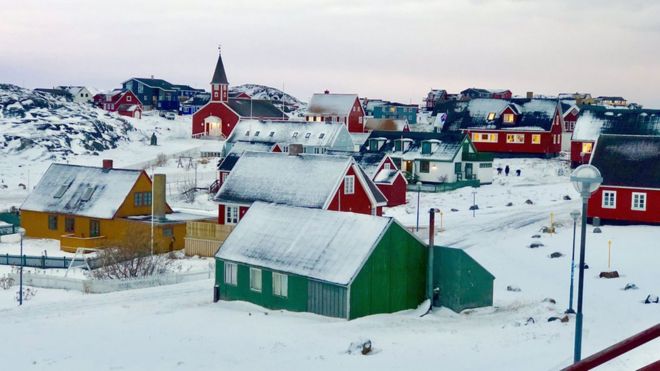 China is flexing its muscles. As the second richest economy in the world, its businessmen and politicians are involved just about everywhere in Asia, Africa and Latin America.

Now, though, China is taking a big interest in a very different part of the world: the Arctic.

It has started calling itself a “near-Arctic” power, even though Beijing is almost 3,000km (1,800 miles) from the Arctic Circle. It has bought or commissioned several ice-breakers – including nuclear-powered ones – to carve out new routes for its goods through the Arctic ice.

And it is eyeing Greenland as a particularly useful way-station on its polar silk road.

Greenland is self-governing, though still nominally controlled by Denmark.

It is important strategically for the United States, which maintains a vast military base at Thule, in the far north. Both the Danes and the Americans are deeply worried that China should be showing such an interest in Greenland.

You’ve got to go there to get an idea of how enormous Greenland is.

It’s the 12th-largest territory in the world, 10 times bigger than the United Kingdom: two million square kilometres of rock and ice.

Yet its population is minuscule at 56,000 – roughly the size of a town in England.

As a result, Greenland is the least densely populated territory on Earth. About 88% of the people are Inuit; most of the rest are ethnically Danish.

In terms of investment neither the Americans nor the Danes have put all that much money into Greenland over the years, and Nuuk, the capital, feels pretty poor. Denmark does hand over an annual subsidy to help Greenland meet its needs.

Every day, small numbers of people gather in the centre to sell things that will generate a bit of cash: cast-off clothes, children’s schoolbooks, cakes they’ve made, dried fish, reindeer-horn carvings. Some people also sell the bloody carcases of the big King Eider ducks, which Inuits are allowed to hunt but aren’t supposed to sell for profit.

At present you can only fly to Nuuk in small propeller-driven planes. In four years, though, that will change spectacularly.

China is bidding for the contracts.

There’ll be pressure from the Danes and Americans to ensure the Chinese bid doesn’t succeed, but that won’t stop China’s involvement in Greenland.

Interestingly, I found that opinion about the Chinese tended to divide along ethnic lines.

Danish people were worried about it, while Inuits thought it was a good idea.

The Greenlandic prime minister and foreign minister refused to speak to us about their government’s attitude to China, but a former prime minister, Kuupik Kleist, told us he thought it would be good for Greenland.

But the foreign affairs spokesman of the main Venstre party in the Danish coalition government, Michael Aastrup Jensen, was forthright about Chinese involvement in Greenland.

“We don’t want a communist dictatorship in our own backyard,” he said.

China’s sales technique in other countries where its companies operate is to offer the kind of infrastructure they badly need: airports, roads, clean water.

The Western powers that once colonised many of them haven’t usually stepped in to help, and most of these governments are only too grateful for Chinese aid.

But it comes at a price.

China gets access to each country’s raw materials – minerals, metals, wood, fuel, foodstuffs. Still, this doesn’t usually mean long-term jobs for local people. Large numbers of Chinese are usually brought in to do the work.

Country after country has discovered that Chinese investment helps China’s economy a great deal more than it helps them. And in some places – South Africa is one of them – there are complaints that China’s involvement tends to bring greater corruption.

But in Nuuk it’s hard to get people to focus on arguments like these.

What counts in this vast, empty, impoverished territory is the thought that big money could be on its way. Kuupik Kleist put the argument at its simplest.