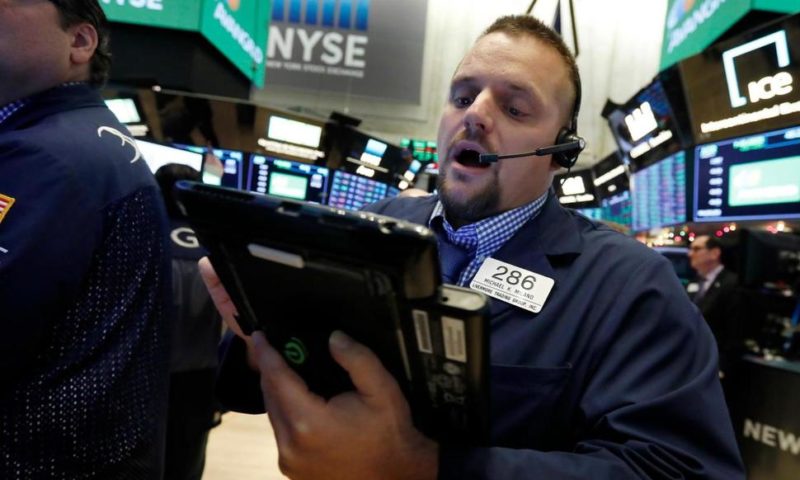 Shares were moderately lower in Asia on Wednesday following a bloodletting on Wall Street as goodwill generated by a truce between the U.S. and China over trade evaporated in confusion over exactly what the two sides had agreed upon.

The Dow Jones Industrial Average fell nearly 800 points. The yield on the benchmark 10-year Treasury note fell to its lowest level in three months, signaling that the bond market is worried about long-term economic growth.

The sell-off short-circuited a recent rally on Wall Street. The market gained Monday after the Trump administration said U.S. and China agreed to a temporary cease-fire in a trade dispute. Last week, stocks jumped when the Federal Reserve’s chairman indicated the central bank could slow the pace of interest rate increases.

On Wall Street, investors’ confidence in the U.S.-China agreement faltered after a series of confusing and conflicting comments from President Donald Trump and some senior officials. That revived fears that the disagreement between the two economic powerhouses could slow the global economy.

“This trade issue is the big overhang, the biggest ceiling, if you will, to keeping the markets from moving higher,” said Randy Frederick, vice president of trading and derivatives at Charles Schwab.

Technology companies, banks and industrial stocks accounted for much of the broad sell-off. Utilities stocks rose. Smaller-company stocks fell more than the rest of the market.

Big losses for Boeing and Caterpillar, major exporters which would stand to lose much if trade tensions persist, weighed on the Dow.

The bond market signaled its concerns as the gap between two-year and 10-year Treasurys reached its narrowest difference since 2007. The 10-year yield is still higher, but not by much.

“You have the drop in bond yields and the implications on growth going forward,” said Willie Delwiche, investment strategist at Baird.

Small-company stocks, which investors see as more risky than large multinationals, fell more than the rest of the market. The Russell 2000 index gave up 68.21 points, or 4.4 percent, to 1,480.75.

The sell-off came ahead of Wednesday’s closure of U.S. stock and bond markets in observance of a national day of mourning for former President George H.W. Bush.

The stunning turn in the markets followed a strong rally on Monday fueled by optimism over the news that President Donald Trump and his Chinese counterpart Xi Jinping had agreed at the G-20 summit over the weekend to a temporary, 90-day stand-down in the two nations’ escalating trade dispute. That optimism quickly faded as skepticism grew that Beijing will yield to U.S. demands anytime soon.

“The actual amount of concrete progress made at this meeting appears to have been quite limited,” Alec Phillips and other economists at Goldman Sachs wrote in a research note.

Moody’s Investors Service suggested in a report Tuesday that despite the latest U.S.-China talks, both countries remain far from resolving their dispute.

“Narrow agreements and modest concessions in their ongoing trade dispute will not bridge the wide gulf in their respective economic, political and strategic interests,” Moody’s analysts wrote.

The trade dispute has rattled markets in recent months as signs emerged that it has begun affecting corporate profits. That’s stoked traders’ fears that if it drags much longer it could further weigh on global economic growth.

“There are plenty of reasons to believe that growth in either the economy or the markets is going to soften next year,” Frederick said.

Meanwhile, markets also got a bit of a jolt Tuesday from remarks by John Williams, president of the Fed’s New York regional bank. During a briefing with reporters, Williams said that, given his outlook for strong economic growth, he continues to “expect that further gradual increases in interest rates will best sponsor a sustained economic expansion.”

The jitters helped drive demand for government bonds Tuesday, pushing prices higher. The yield on the 10-year Treasury note fell to 2.91 percent from 2.99 percent late Monday, a large move. The slide in bond yields, which affect interest rates on mortgages and other consumer loans, weighed on bank stocks. Citigroup fell 4.5 percent to $62.26.

Chipmakers were among the biggest decliners in a technology sector slide. Advanced Micro Devices dropped 10.9 percent to $21.12, while Micron Technology lost 7.9 percent to $36.88.

Apple lost 4.4 percent to $176.69 after the consumer electronics giant was downgraded by HSBC analysts, citing the possibility that iPhone volume and value growth may moderate due to a saturated mobile phone market.

United Parcel Service slumped 7.4 percent to $106.77 and FedEx dropped 6.3 percent to $215.52. Morgan Stanley analysts said in a note that the market was underestimating the challenge those companies would face from Amazon Air.