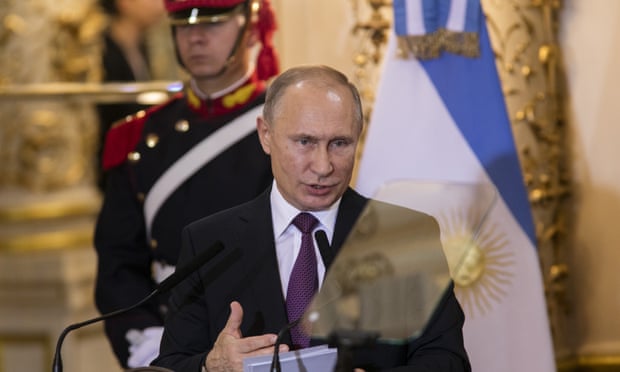 Vladimir Putin has said it is “too early” to return Ukrainian sailors and naval vessels seized by Russia in the Sea of Azov, accusing the Ukrainian government of provoking an incident as a distraction from domestic problems.

Putin was speaking to reporters after the G20 summit in Buenos Aires, where Donald Trump cancelled a meeting with the Russian leader because of Moscow’s refusal to release the 24 Ukrainians. The Russian president said it was necessary to detain the captives while a legal case was put together to demonstrate that the three Ukrainian naval vessels violated Russia’s territorial waters. He said the ships’ logs would show that their attempt to cross the Kerch strait from the Black Sea into the Sea of Azov – enclosed by Russia, the Crimean peninsula and mainland Ukraine – was a deliberate provocation.

Asked if he might consider exchanging the captive sailors for Russians in Ukrainian detention, Putin said: “We are not considering a swap and Ukraine did not raise this issue, and it’s too early to talk about that. They are still being investigated.

“We need to establish the fact that this was a provocation by the Ukrainian government and we need to put all these things on paper,” he added, arguing that the incident was part of a wider pattern of Ukrainian provocation.

“The current Ukrainian leadership is not interested in resolving this at all,” Putin said. “As long as they stay in power, war will continue. Why? Because when you have provocations, such hostilities like what just happened in the Black Sea … you can always use war to justify your economic failures.”

Putin gave conflicting accounts of the Kerch incident. He first alleged that the Ukrainian boats, two small gunboats and a tugboat, had been trying to cross the strait in secret, when they clashed with the Russian coastguard.

The Ukrainian tugboat was rammed by Russian vessels, and one of the gunboats was fired on, sustaining damage in the hull and the bridge. Moscow said the clash took place inside Russia’s territorial waters, which extend 12 miles (20km) from the coastline, which Ukraine denies. Kiev says its vessels notified the Russian maritime authorities of their intention of going through the strait and that the Russians opened fire on its vessels after they had turned around and were heading away from the strait into the open wars of the Black Sea.

In his remarks in Buenos Aires, Putin appeared to confirm some of Kiev’s claims, conceding that the Ukrainian and Russian vessels had been in contact with each other before the incident, and that the Ukrainians had refused to use a Russian pilot to help them navigate the narrow strait. The Ukrainians reject Russian insistence that they use a Russian pilot, saying it is not required by a 2003 agreement on sharing the waterway, and is a recently imposed means of controlling Ukrainian access.

In his more detailed account, Putin also seems to concede that the Ukrainian boats were fleeing when they were fired on.

“The border guard told them: If you go through the Kerch strait you should hire our pilot. They said no, and they went straight for the strait. And that’s when the ships collided after that, because our border guard started squeezing them out,” Putin said.

He added: “Prior to that they said they were going to blow up our bridge so what do you expect our border guards to do?” – an apparent reference to Moscow’s earlier claims that Ukrainian radicals planned to blow up a new bridge between Russia and Crimea, which Russia annexed in 2014.

Putin said the Russian coast guard “told them to stop and they did not respond”.

“They started running away, so that’s it,” the Russian president said. “The border guards acted in accordance with the orders they were given. Any border guards of any country would do that if their border was violated.”

An analysis by the Bellingcat investigative journalism agency suggests that the Ukrainian vessels may have been in Russian territorial waters at the time the tugboat was rammed, but under the 2003 agreement Ukrainian ships had right of access through the strait. Furthermore, evidence provided by Russia and Ukraine suggests the Ukrainian gunboat was fired on when it was in international waters.