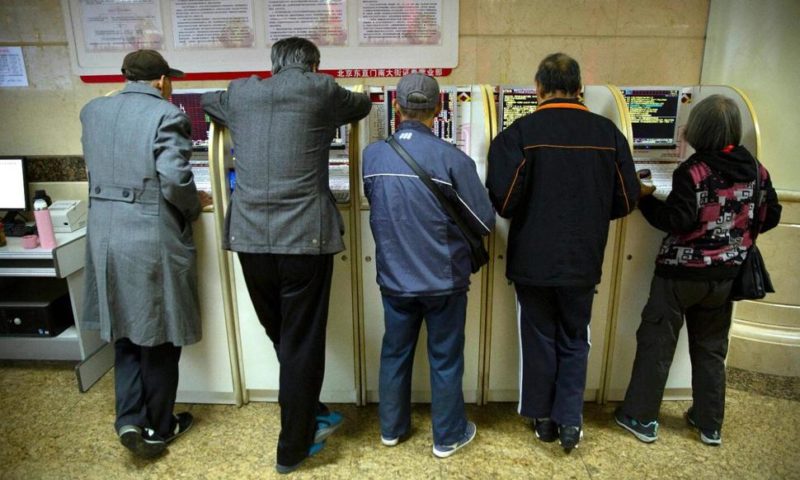 Lu’s shares soared over the past decade. But the 65-year-old cashed out this year, driven away by plunging prices, insider trading scandals, a cooling economy and a tariff war with Washington.

“Investors should get out,” said Lu, watching flickering prices on a wall-mounted display at a Beijing brokerage. “I am here just for fun and not to make money.”

President Xi Jinping’s government is struggling, with limited success, to dispel such gloom and talk stock prices back up with promises of tax cuts, more bank lending and a media campaign led by its economy czar.

The benchmark Shanghai Composite Index sank 30 percent from January through mid-October. Prices fell so far that China gave up its status as the No. 2 market by share value after the United States and dropped to third place behind Japan. The index has gained 5 percent since late October but is the world’s worst performer this year.

The slump adds to challenges for communist leaders as they try to shore up economic growth and carry on a tariff war with President Donald Trump over Beijing’s technology policy. It also puts a kink in plans for state industry to use share sales to pay down a multibillion-dollar mountain of debt and modernize.

China’s markets are unusual among large countries. Created to raise money for state industry, they have a growing number of private firms but still are dominated by government companies such as oil giant PetroChina Ltd. and China Mobile Ltd., the world’s biggest phone carrier.

Prices react to policy changes instead of economic performance. Conditions abroad have little influence because Chinese markets are kept walled off from global financial flows. A handful of U.S. and European financial firms have been granted the status of domestic investors since 2002 but the main class of “A” shares is off-limits to most foreign investors.

The latest price slide began in January after Beijing clamped down on bank lending to rein in surging debt.

Shares in real estate and other companies that thrive on credit were hit hard. Aluminum Corp. of China, a major building materials supplier, tumbled 52 percent. China Vanke Co., a developer, is off 40 percent.

The economic downturn brought on by credit controls was more abrupt than Chinese leaders wanted, prompting them to reverse course and tell banks to lend more. They promised tax cuts and other help after economic growth slumped to a post-global crisis low of 6.5 percent over a year earlier in the three months ending in September.

But the impact of those measures has yet to show up in economic data.

The slump drove university student Shao Xinyu to the sidelines less than a year after he started buying stocks.

Shao, from the central city of Zhengzhou, invested 30,000 yuan ($5,000) from his savings and gifts from his parents. The market plunge slashed the value of that stake by one-third.

“I won’t invest more,” said Shao, 21. “I need to wait to see how the economy and the market develop.”

China’s stock markets have ridden a boom-and-bust roller coaster since 1990, when the first exchange since the 1949 communist revolution opened in Shanghai. A second exchange followed the next year in Shenzhen, near Hong Kong.

Despite that, small investors piled into stocks.

The number of individual Chinese trading accounts nearly quintupled between 2006 and 2017, hitting 192 million, according to the Shanghai Stock Exchange’s annual report.

Brokerages opened trading rooms where small investors with jars of tea and bundles of financial newspapers perched on plastic seats in front of wall-mounted price monitors. Today, most of those have closed as trading shifted online.

Three-quarters of Chinese trading accounts are worth less than 500,000 yuan ($71,000), according to the Shenzhen Stock Exchange, and most traders have a few thousand dollars invested, buying shares directly instead of using mutual funds.

Investors already were skittish after the 2015 price collapse. Then, Beijing plowed billions of dollars into stopping the slide and suspended plans for stock offerings by state-owned companies.

Confidence took another hit after a wave of arrests of brokerage executives, a star Chinese trader and a former market regulator on charges of insider trading and manipulating prices.

“I avoid putting in more money, because what is the use of doing that?” said Li, 81.

Regulators have tried in vain to encourage investors to shift from rapid-fire trading to holding for the long term. The Shanghai exchange said individual investors accounted for 82 percent of its daily trading volume in 2017, little changed from previous years.

Instead, regulators are gradually allowing in more foreign buyers in hopes they will provide ballast as long-term investors.

Since 2014, foreigners have been able to buy some “A” shares through Hong Kong. In July, regulators announced foreigners working in China would be given access to the whole market.Now, investors worry about a possible new downward spiral if prices of shares pledged as collateral by companies for loans fall far enough that banks and brokerages might seize and sell them to recover their money.

The government tried to allay those fears by announcing on Oct. 19 that Chinese insurers would be allowed to create units to buy such shares temporarily to keep them from flooding the market.

“I welcome the government’s efforts to support the markets,” said Li, the retired hotel executive. “But as for whether that is effective, I really don’t know.”

Xi followed with a Nov. 1 speech that promised tax cuts and other help to entrepreneurs that generate new jobs and wealth. Private sector analysts saw that as an affirmation of the importance of private business amid complaints state industry is a drag on the economy.

The latest measures helped to reassure Liu Fei, a manager at a Shanghai real estate company. She stuck with the market after losing 40 percent of her money in the 2015 crash but said her faith was waning.

“A week ago, I panicked and felt the Chinese stock market was finished,” said Liu, 28. “But I gained confidence after the government issued supporting policies.”