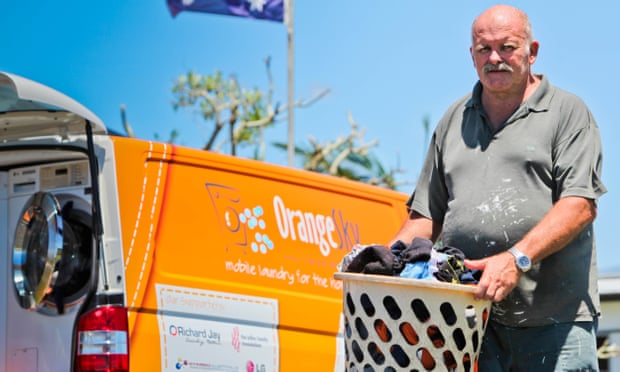 A mobile laundry and shower service for the homeless has begun international expansion after being inundated with requests from struggling cities around the globe.

Four years ago two young Australian men saw a gap in the market and fitted out a van with a washer and dryer, driving it to parks, churches and drop-in centres in a bid to bring hygiene services to the homeless community on their own turf.

Lucas Patchett, co-founder of Orange Sky, said washing was initially viewed as a low priority for the community, and there was widespread scepticism about the plan.

“When we dreamed this up it was a world first, and we had a lot of practical issues to overcome. How would we power the machines, where would we dispose of the waste water?” says Patchett.

“But we strongly believed that access to hygiene was a basic human right.”

There are more than 100,000 homeless Australians, and the population has complex needs. Patchett says Orange Sky has been able to forge bonds with the community by bringing the vans to its doorstep, and because it has no agenda besides the straightforward, free services it offers.

Health benefits of the mobile laundry include halting the spread of mould, scabies and bed bugs, but Patchett says it is the mental health boost that is most significant.

“We’re not preaching anything, or teaching anything or pushing anything. But it does take an hour to wash and dry someone’s clothes and during that time people tend to hang around. That’s when the conversations start.

“Ninety-nine percent of the day, these people are walked past and ignored and not even looked at, and that can have a huge impact on psyche and sense of self-worth. So we just say g’day and offer something really practical that makes people immediately feel more confident to engage with the broader society.”

There are now 27 Orange Sky laundry and shower vans operating in Australia, using generators and solar power to run the machines. Operated by volunteers, they do around 15-20 laundry loads and showers each day.

Last month Orange Sky expanded overseas, unveiling a van in Auckland, New Zealand, with plans to venture to the US next.

A number of other mobile laundry services have launched around the world, including in several US states, Brighton in the UK and Athens, Greece, where 20,000 people are homeless. Orange Sky has also been asked to provide services to Singapore, Hong Kong and other British cities.

According to Auckland council, at least 1,000 people sleep rough in New Zealand’s biggest city every night, and Orange Sky’s expansion has been welcomed by those caring for the community, saying the service has been embraced.

The New Zealand housing and urban development minister, Phil Twyford, said Orange Sky offered rough sleepers something many New Zealanders took for granted, and was one part of giving them back their dignity and self-respect.

“While superficially the service is about clean clothes and showers, the main benefits are the social interactions,” said Twyford.

Mike, one of the first clients to use the Orange Sky van in Auckland, said it was a relief to be able to wash his clothes and bedding, as well as himself, on a regular basis.

“It is a bit tricky, it’s hard enough to find somewhere to live and something to eat, let alone find a place to wash your clothes and have a wash,” he said.

“I think it’s a good concept … and it has a roll-on effect. Your clothes are clean, you’re clean and you feel good about yourself.”

Patchett says homeless women find the service particularly valuable, as many struggle finding a safe place to shower in privacy.

“There was a woman who came to shower and she said she hadn’t had a safe space to do that for a number of years,” says Patchett.

“And even just being locked in the back of a van with volunteers out the front really gave her some peace of mind.”

Another man who had not showered for more than four months moved his social worker to tears when he climbed into the back of the Orange Sky van for a few minutes of privacy and relaxation.

Cities in New Zealand such as Wellington, Whangarei and Christchurch have been in touch requesting Orange Sky services in their towns, and Patchett says with enough funding and volunteers, the service will soon spread countrywide.