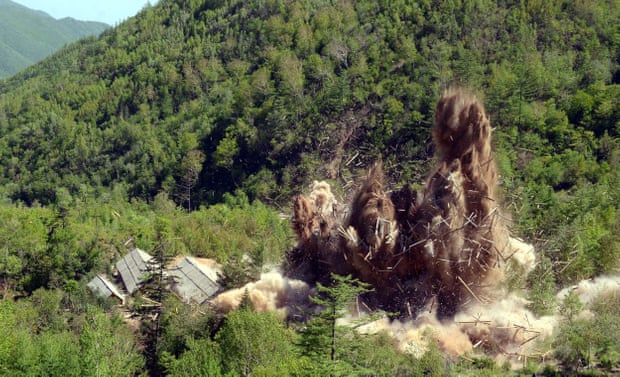 International experts will be allowed into the dismantled Punggye-ri site, according to reports in South Korea

North Korea is preparing its Punggye-ri nuclear test site for international inspectors, according to South Korea’s National Intelligence Service, the first time foreign experts would be allowed to inspect facilities since a thaw in tensions this year.

Intelligence officials had observed what they believed to be preparations for possible inspections at Punggye-ri nuclear test site and the Sohae Satellite launching ground, Kim Min-ki of the ruling Democratic Party told reporters, according to Yonhap news agency.

The South’s national intelligence service observed North Koreans “conducting preparation and intelligence activities that seem to be in preparation for [a] foreign inspectors’ visit”, the politician added.

The site was officially closed in May, when North Korea invited a handful of international journalists to observe as the tunnels where previous nuclear tests were conducted were sealed with explosions. Experts at the time said the move was mostly symbolic, and radiation monitoring equipment brought by reporters was confiscated by North Korea officials.

No major movements were seen at Yongbyon, the North’s main nuclear complex.

The revelations came during a routine parliamentary audit of government agencies, and also revealed North Korea has continued to deploy hackers in an effort to earn foreign currency.

While North Korea has stopped nuclear and missile tests in the past year, it has not allowed international inspections drawing widespread criticism.

North Korea agreed to allow international inspectors to observe a “permanent dismantlement” of key missile facilities, and take further steps, such as closing its main Yongbyon nuclear complex, in return for reciprocal measures by the United States, the South’s president Moon Jae-in said in September. Neither North Korea nor Moon has detailed what Pyongyang is seeking in return.

His comments followed a summit where the North’s leader, Kim Jong-un, also pledged to close Sohae and allow experts to observe the dismantling of the missile engine testing site and a launch pad.

American officials have been skeptical of Kim’s commitment to giving up nuclear weapons, but the North’s pledge at the summit with the South drew an enthusiastic response from President Donald Trump.

Yemen war: US unveils blueprint for ceasefire and peace talks