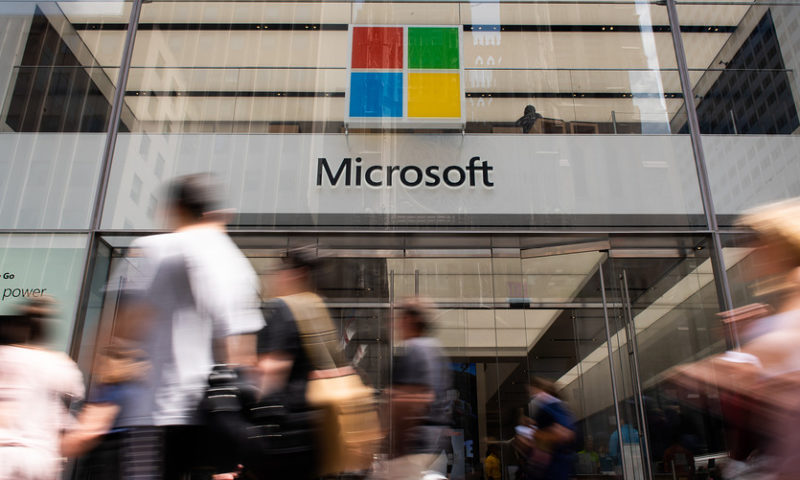 Amazon was very nearly the second U.S. company worth $1 trillion last month. Now, its worth less than a neighbor and major cloud rival.

Amazon AMZN, -7.82% had been No. 2 to Apple Inc. AAPL, -1.59% and briefly flirted with a $1 trillion market cap in early September, but a steep descent after Thursday evening’s earnings on top of an October tech-stock swoon have chopped nearly $200 billion off its valuation. Microsoft took a small hit on Friday, losing 1.2%, but finished the week worth $821 billion, $20 billion more than the e-commerce powerhouse on the other side of Lake Washington.

On back-to-back days this week, Microsoft and Amazon promised investors at least 10% revenue growth for the fourth quarter. Microsoft was rewarded after its report, but Amazon’s forecast of 10%-to-20% growth represented a significant decline from the 30% revenue growth it reported for the third quarter.

Amazon may have been cautious in its forecast. “Much of our, not only our revenue for the quarter, but also for the year, comes in that very tight window between the middle of November and the end of the year, so it’s always a very difficult period for us to estimate,” Chief Financial Officer Brian Olsavsky said Thursday afternoon in an earnings call.

Amazon had a legitimate accounting excuse, as well. Amazon Prime subscription fees were “tilted” to the fourth quarter every year until 2018, Olsavsky said, when Amazon stretched that total across the year. With 100 million customers now paying an increased $120 subscription price, that’s a big chunk of money that disappears out of this holiday season’s sales figures.

Apple became the first company to top the $1 trillion barrier in August, winning a footrace with Amazon, and has maintained the milestone even through this week’s tech bloodbath, ending Friday with a market valuation of $1.05 trillion. Several analysts expect Microsoft to eventually top $1 trillion as it continues to successfully battle Amazon in cloud computing while enjoying gains in cloud software and its legacy personal-computer business, but more believe Amazon will get there.

Microsoft’s share price would need to top $130 at current shares-outstanding levels to reach $1 trillion. A dozen analysts have share-price targets for Microsoft of $130 or higher; the average price target of more than 30 analysts tracked by FactSet as of Friday morning was $125.69.

Amazon would need to top $2,045 a share to approach a $1 trillion valuation at its current share count. After the e-commerce leader’s earnings report, the average price target on its stock from more than 40 analysts tracking the company was $2,183.67. Only eight of those analysts have targets lower than $2,050 a share.