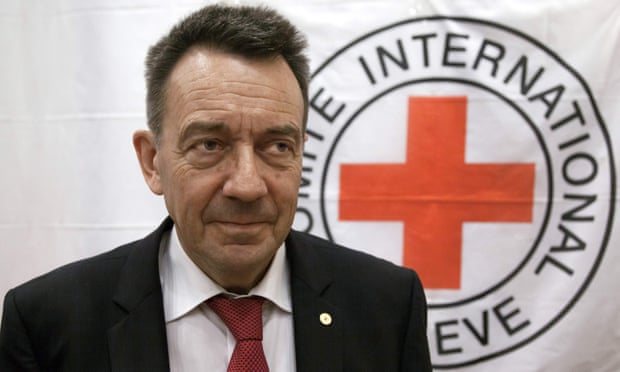 ‘It’s obvious some of the violence we are observing … is directly linked to climate change,’ says Peter Maurer

Climate change is already exacerbating domestic and international conflicts, and governments must take steps to ensure it does not get worse, the head of the International Committee of the Red Cross has said.

Peter Maurer told Guardian Australia it was already making an impact and humanitarian organisations were having to factor it into their work far earlier than they were expecting.

“In many parts of the world where we work it’s not a distant engagement,” he said.

“When I think about our engagement in sub-Saharan Africa, in Somalia, in other places of the world, I see that climate change has already had a massive impact on population movement, on fertility of land. It’s moving the border between pastoralist and agriculturalist.”

Maurer, who was in Australia to speak about the changing nature of modern conflict, said concern about the impact of climate change in the Pacific was “enormous”.

He said changing rainfall patterns change the fertility of land and push populations, who may have settled and subsisted in one area for centuries, to migrate.

“It’s very obvious that some of the violence that we are observing … is directly linked to the impact of climate change and changing rainfall patterns.”

Earlier this month the United Nation’s climate panel, the IPCC, gave the world just 12 years to make the drastic but necessary changes. Its report said emissions had to be cut by 45% before 2030 if warming was to be restricted to 1.5C.

At 1.5C, 10 million fewer people would be affected by rising sea levels, and the proportion of the world’s population exposed to water stress could be 50% lower.

A 2016 study, which examined three decades of data, determined that a 1C rise in temperatures in a country reliant on agriculture correlated with a 5% increase in migration to other countries.

“When [populations] start to migrate in big numbers it leads to tensions between the migrating communities and the local communities. This is very visible in contexts like the Central African Republic, like Mali and other places,” said Maurer.

He said it was up to governments, not humanitarians, to develop the policies needed to deal with the “root causes” of climate change.

“As a humanitarian I am used to political decisions … never [being] as fast as we hope for them, or as generous or as big, but it’s encouraging an increasing number are recognising the importance of the issue and are taking steps to reduce the impact of climate change on our habitat – the Paris Agreement is an important step forward,” he said.

“For us we hope the international community will soon enough take necessary steps, so at the end of the day they won’t have to pay by increasing humanitarian impacts which, again, we already see in other conflicts.”

Donald Trump said little about the IPCC report, having already pledged to withdraw the US from the Paris Agreement.

This made things difficult for everyone else, Ola Elvestuen, Norway’s environment minister, said last month, but still called for countries to transition away from fossil fuels, embrace electric cars and halt deforestation.

The Australian government largely dismissed the IPCC report and its recommendations – which included the rapid phase out of coal – as well as the pleas of Pacific Island nations.

Australia has no formal energy or climate change policy, and the Coalition government at one point flagged pulling out of the Paris Agreement.

MPs and ministers maintain that Australia is on track to meet emissions reductions targets, despite official government figures on emissions suggesting Australia will not, according to current projections.

On Sunday Australia’s treasurer and former energy minister, Josh Frydenberg, rejected the suggestion it should get his government rethink its policies. He said the government did not intend to “reduce emissions at the expense of people’s power bills”.

Anote Tong, the former president of Kiribati, was in Australia this week advocating for action.

Maurer said there were now more people displaced than ever before, approaching 70m across the globe. Two thirds are displaced internally, and most of those who fled would go to a neighbouring country.

“At the end of the day there is no single policy that allows in any satisfactory way a response to these issues, but there are multiple things which can be done,” he said.