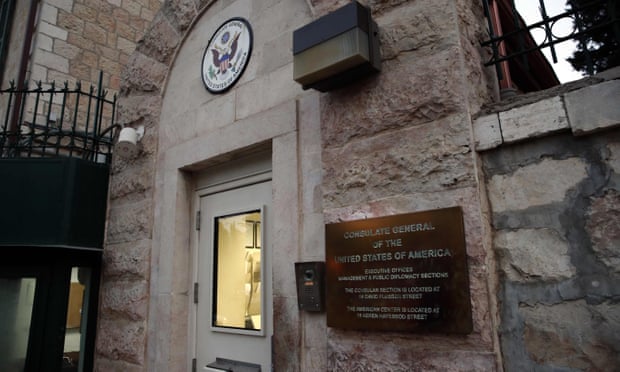 Consulate general and embassy will merge, Mike Pompeo said, but it ‘does not signal a change of US policy’

The United States has announced it plans to close its main diplomatic mission to the Palestinians, downgrading the consulate in Jerusalem to a unit under the control of the embassy to Israel.

“We plan to achieve significant efficiencies and increase our effectiveness by merging US embassy Jerusalem and US consulate general Jerusalem into a single diplomatic mission,” the secretary of state, Mike Pompeo, said, adding that the move “does not signal a change of US policy on Jerusalem, the West Bank or the Gaza Strip”.

He said a new Palestinian Affairs Unit working as part of the embassy would continue to conduct “a full range of reporting, outreach and programming” with Palestinians.

But as the consulate is seen as the unofficial embassy to Palestinians, the move will be interpreted as another major blow from the Trump administration against Palestinian aspirations for an end to occupation and their hopes of a state.

During the past year, Washington has recognised the contested city of Jerusalem as Israel’s capital and sought to dismantle vital US engagement with the Palestinians, including slashing humanitarian aid to Palestinian refugees and shuttering their diplomatic offices in DC.

The chief Palestinian negotiator, Saeb Erekat, said the consulate move showed that the Trump administration had fully “endorsed the Israeli narrative, including on Jerusalem, refugees and settlements”.

“This decision has nothing to do with ‘efficiency’ and a lot to do with pleasing an ideological US team that is willing to disband the foundations of US foreign policy, and of the international system, in order to reward Israeli violations and crimes,” he said.

Nabil Shaath, the international affairs adviser to the Palestinian president, Mahmoud Abbas, said Trump was “cutting the last connection he is said to have with the Palestinian people. He is practically saying Jerusalem is for Israel”.

The new unit will remain in its current location, although it will no longer be autonomous in its affairs. To avoid showing diplomatic favouritism, many countries host an embassy to Israel in Tel Aviv and a consulate in Jerusalem that works autonomously to liaise with Palestinians.

The merger will be led by the US ambassador to Israel, David Friedman, a former Trump bankruptcy lawyer who has been a vocal backer of Israeli settlements in the occupied Palestinian territories, which are illegal under international law.

Palestinians, who have rejected the US’s historical role as a peace mediator, claim East Jerusalem as the capital of any future state. Israeli forces captured that part of the city from Jordan in 1967 and have occupied it ever since, claiming all of Jerusalem as the “undivided” Israeli capital.

Pompeo said in the statement that the US has “taken no position on final status issues, including boundaries or borders. The specific boundaries of Israeli sovereignty in Jerusalem are subject to final status negotiations between the parties.”

Trump, however, has offered confused and mixed messaging on the issue, saying Jerusalem is now “off the table” for any peace negotiations after he recognised the holy city as Israel’s capital.