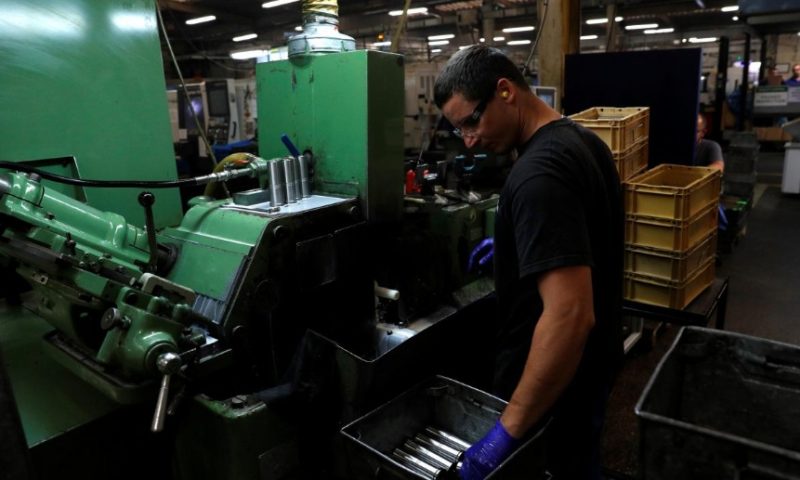 At Muller Precision Engineering’s plant in Redditch, south of Birmingham, James Gibbs is in charge of three clattering pieces of machinery older than he is.

His two co-workers – one Polish, the other Hungarian – place semi-finished metal parts on plastic spindles every 20 seconds and hold them between grinders for another 15 seconds, then check their dimensions before dropping them into a tray.

“It’s a very repetitive job,” said Gibbs, 27. “You’ve got to keep your concentration for however many hours you’re on there, so that you don’t misload it.”

By the middle of next year, the work of two of the staff will be done by sensors and robotic arms.

British manufacturers have long lagged behind their developed country peers on automation, thanks in part to a seemingly inexhaustible pool of workers from Europe.

The flow of low-cost labour has become less reliable since Britain voted to leave the European Union in June 2016, however. Net migration from eastern Europe hit an eight-year low in the 12 months to March, official data shows, and industry groups fear the situation will only get worse.

Unlocking automation investment could have big implications for the economy. If companies tilt away from labour, economists say, it could boost productivity and take the lid off wage increases that have languished at around 2 percent in recent years.

Manual work at the site can be boring and dangerous, which can make it hard to find staff, said Adam Cunningham, managing director at the plant, which employs around 130 people.

“That, along with a Brexit that reduces the amount of labour coming into the country, made us say we need to look at automation in that particular area,” he said. “Basically, we’re going to be replacing humans with robots.”

The International Federation of Robotics (IFR) says British factories are less likely to use industrial robots than any other leading economy and even some countries in eastern Europe.

Bank of England (BoE) officials and industry experts say they may finally be catching up.