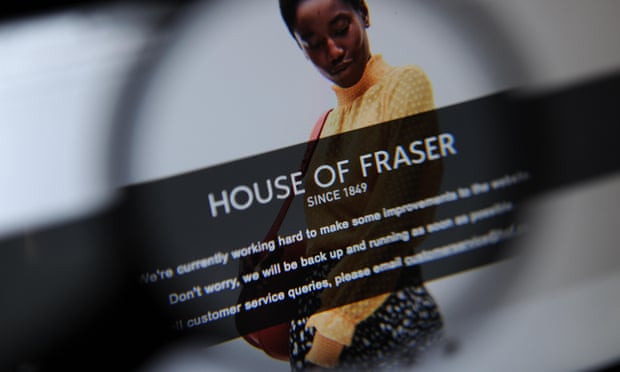 From the fear of losing the balance on a gift card to not getting a refund for returns, we ask: can you trust the store?

Is it safe to order online at the “new” House of Fraser, now owned by Sports Direct? One customer who bought £380 of goods has found himself in a similar ordeal to the thousands of unhappy customers who lost out when the “old” company went into administration.

Harps Singh, from Birmingham, paid £380 for three pairs of designer jeans in late September, just days after the store relaunched its website. They arrived as expected, but as they were not suitable he decided to return them.

He presumed his parcel would be accepted back and his £380 refunded. But he has been told by Royal Mail that it is among the thousands of other parcels stacked up in a Wellingborough warehouse full of goods returned by customers of the “old” House of Fraser, which the company is refusing to refund.

His repeated requests that his refund be processed have drawn no response. He has been told he can’t return the items to a store, as staff have been told not to process web-order refunds.

Singh must have been one of the first people to use the relaunched website, which was offline for about a month after Sports Direct’s Mike Ashley’s controversial buyout. At the time, Ashley pledged the store would become “the Harrods of the high street”.

Singh says: “I’d always been a happy House of Fraser customer, and fortunately wasn’t one of those caught up in the collapse. I was happy to pay the new delivery charges because it meant I didn’t have to go shopping, but now I discover my returned items can’t be found among a sea of parcels.

“No one can tell me what’s going on – it’s ridiculous. I certainly won’t be ordering again any time soon, and others who were thinking of doing the same need to be aware of what’s going on there.”

The original department store’s £1bn collapse left thousands of consumers out of pocket. Many had placed orders for items that were not delivered, and unwittingly became creditors of the old company.

The Observer understands that there may be better news for the 25,000 holders of the original House of Fraser gift cards.

After the takeover, House of Fraser asked card holders to send in their cards, promising a replacement. Some of these have also been returned unopened, and most customers assumed they had lost their money – in some cases as much as £750. This week, it emerged that some customers have received letters telling them they will be issued with replacement e-vouchers that will be valid until 31 January 2019. Further gift cards can be sent back until Wednesday 31 October, it states. The company has, typically, made no formal statement.

Signs in stores state that the company is only accepting Post Office, One4all gift cards and House of Fraser reward vouchers.

Furious customers have taken to social media to vent their frustration at the lack of information. Several longstanding clients have had enough and promised they will never shop in the chain again.

The company had originally promised to refund customers who had online orders cancelled and then reneged on that offer. Last week, the firm’s former directors and senior managers were sacked.

Yvonne Fovargue MP, who chairs the all-party parliamentary group on consumer protection, says the debacle has demonstrated the need for a consumer ombudsman with “real teeth”. She adds: “Mike Ashley made a number of promises to customers when he bought the business last month, and these should be honoured. He certainly has a legal duty to fulfil, or at least refund, orders placed since he took over. His silence here is unacceptable.”

When contacted by the Observer, House of Fraser told us: “Our website is now functioning normally and we are not aware of any significant backlog of returns relating to orders made after 10 August. If customers experience any isolated issues, we recommend they contact customer services in the normal way.”

Paying again for a paid-for item

A House of Fraser customer who paid the last instalment on a £1,280 sofa on the day the company collapsed – and was told he’d lost his money – has described his shock at being called last week by the store and asked if he wanted to buy the sofa they’d refused to supply for a discounted £750.

James Mohan was told he would have to join the long queue of creditors with only the slimmest chance of seeing any of his money again. When his wife gave birth to their first child there was no sofa to sit on and no money to buy another.

“The salesman told me they had called other customers and the majority of people do actually repurchase an item they have already paid for,” he says. “It seems a despicable way to do business.”

Mohan was lucky in that he had paid the final £6 instalment with his Asda credit card. This enabled him to claim the £1,280 back from the card provider – Creation Financial Services – using section 75 of the Consumer Credit Act. House of Fraser denied it had been calling customers in this way and said the call must have come from a supplier “who was tying to be helpful”.
Anna Tims