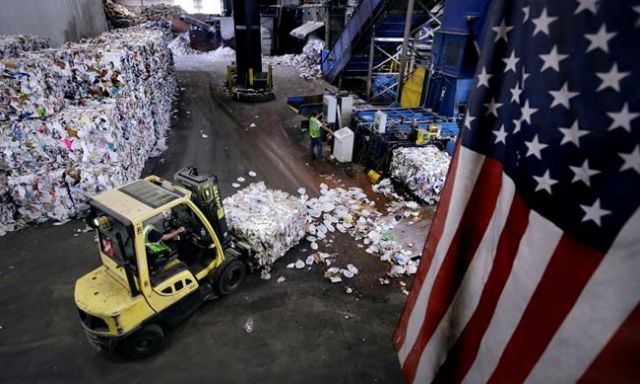 America’s recycling industry is in the dumps.

A crash in the global market for recyclables is forcing communities to make hard choices about whether they can afford to keep recycling or should simply send all those bottles, cans and plastic containers to the landfill.

Mountains of paper have piled up at sorting centres, worthless. Cities and towns that once made money on recyclables are instead paying high fees to processing plants to take them. Some financially strapped recycling processors have shut down entirely, leaving municipalities with no choice but to dump or incinerate their recyclables.

“There’s no market. We’re paying to get rid of it,” says Ben Harvey, president of EL Harvey & Sons, which handles recyclables from about 30 communities at its sorting facility in Westborough, Massachusetts. “Seventy-five per cent of what goes through our plant is worth nothing to negative numbers now.”

It all stems from a policy shift by China, long the world’s leading recyclables buyer. At the beginning of the year it enacted an anti-pollution program that closed its doors to loads of waste paper, metals or plastic unless they’re 99.5 per cent pure. That’s an unattainable standard at U.S. single-stream recycling processing plants designed to churn out bales of paper or plastic that are, at best, 97 per cent free of contaminants such as foam cups and food waste.

The resulting glut of recyclables has caused prices to plummet from levels already depressed by other economic forces, including lower prices for oil, a key ingredient in plastics.

“A year ago, a bale of mixed paper was worth about $100 per ton; today we have to pay about $15 to get rid of it,” says Richard Coupland, vice-president for municipal sales at Phoenix-based Republic, which handles 75 million tons of municipal solid waste and 8 million tons of recyclables nationwide annually. “Smaller recycling companies aren’t able to stay in business and are shutting down.”

Kirkwood, Missouri, announced plans this summer to end curbside recycling after a St. Louis-area processing facility shut down. Officials in Rock Hill, South Carolina, were surprised to learn that recyclables collected at curbside were being dumped because of a lack of markets. Lack of markets led officials to suspend recycling programs in Gouldsboro, Maine; DeBary, Florida; Franklin, New Hampshire; and Adrian Township, Michigan. Programs have been scaled back in Flagstaff, Arizona; La Crosse, Wisconsin; and Kankakee, Illinois.

Other communities are maintaining recycling programs but taking a financial hit as regional processors have raised rates to offset losses. Richland, Washington, is now paying $122 a ton for Waste Management to take its recycling; last year, the city was paid $16 a ton for the materials. Stamford, Connecticut, received $95,000 for recyclables last year; the city’s new contract requires it to pay $700,000.

Recyclable materials processors are re-negotiating contracts with municipalities to reflect the fact that prices paid for recyclables no longer offset the cost of collecting and sorting them.

“What we’re advocating is to step back and re-look at recycling,” Republic’s Coupland said. “This is the new normal. The model no longer funds itself.”