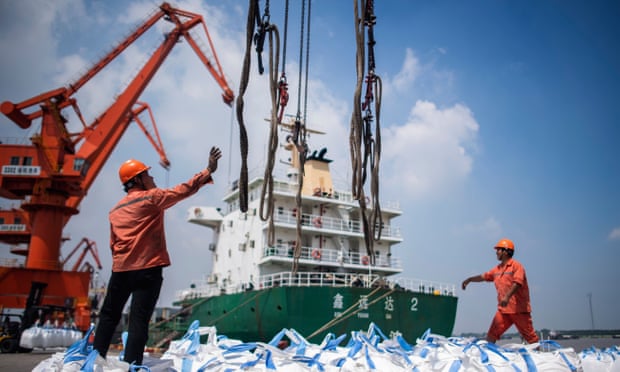 China has slashed the amount of cash some of its banks must hold in reserve as Beijing’s leadership seeks to bolster a flagging economy.

As higher US interest rates and fears of a trade war piles pressure on economies around the world, China’s central bank said on Sunday that it was cutting the reserve requirement ratios (RRRs) by one percentage point from 15 October to lower financing costs and spur growth in the world’s second-biggest economy.

The reserve cut, the fourth by the People’s Bank of China (PBOC) this year, came after Beijing pledged to speed up plans to invest billions of dollars in infrastructure projects as the economy shows signs of cooling further.

Investment growth has slowed to a record low and net exports have been a drag on growth in the first half of the year. China releases a snapshot of its services sector on Monday, which will be closely watched for signs of slower growth.

Reserve requirement ratios (RRRs) – currently 15.5% for large commercial lenders and 13.5% for smaller banks – would be cut by 100 basis points from October 15, the PBOC said.

The injection of cash into the economy, which will be 750bn yuan ($109.2 billion), will also boost hopes that the negative impact of higher US tariffs on Chinese exports can be eased.

The cut, which was announced on the last day of China’s week-long national day holiday, showed the central bank was probably worried about the impact of “external shocks” to markets such as a speech last week by US vice president Mike Pence criticising Beijing, said Zhang Yi, chief economist at Zhonghai Shengrong Capital Management.

Global share markets were poised to open down on Monday after selling on Friday in Europe and Wall Street. But the PBOC move could jolt them back into life.

“The trade war’s impact on the economy is showing. There is room for further reductions and I expect another one percentage point cut by the year-end,” Xu added.

The central bank said the reserve cut would not see the yuan devalued and that monetary policy would remain “prudent and neutral”.

The central bank would “maintain reasonably ample liquidity to drive the reasonable growth of monetary credit and social financing scale”, it said.

However, it will also raise fears that Beijing – under pressure from the higher dollar and tariffs – is again delaying plans to reduce huge debt in the Chinese economy in favour of a short-term fix to stabilise growth.

Why is it so hard for Africans to visit other African countries?