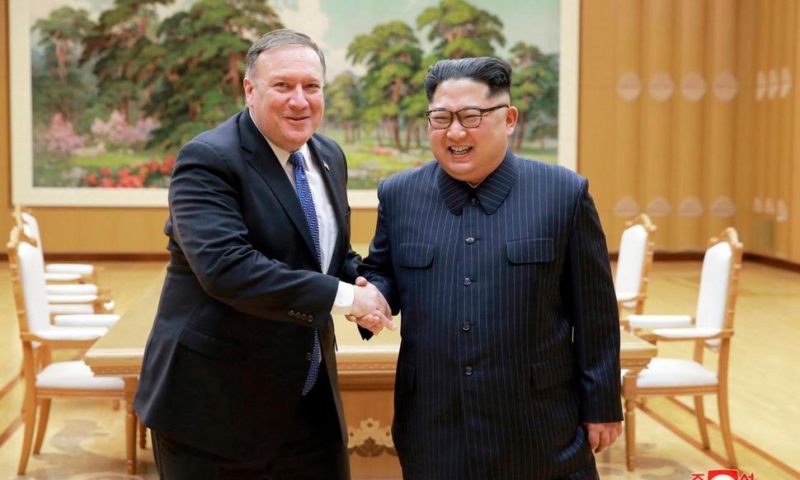 North Korea warns Washington a declaration ending the Korean War shouldn’t be seen as a bargaining chip in denuclearization talks.

TOKYO — North Korea warned Washington through its state media Tuesday that a declaration ending the Korean War shouldn’t be seen as a bargaining chip in denuclearization talks — but suggested lifting sanctions might be.

The North’s official news agency issued a commentary claiming Pyongyang has taken significant measures to end hostile relations between the two countries but said the U.S. is “trying to subdue” it through sanctions, a not-so-subtle call for Washington to lift sanctions if it wants further progress in their stalled nuclear negotiations.

The commentary said a declaration replacing a 65-year-old armistice to formally end the war “is not just a gift from a man to another,” and added, “it can never be a bargaining chip for getting the DPRK denuclearized.”

The DPRK is short for the North’s official name — the Democratic People’s Republic of Korea.

The commentary was directed at supporters of the U.S. policy to maintain maximum pressure and sanctions on North Korea until it has made clear and significant moves to denuclearize.

U.S. Secretary of State Mike Pompeo — a vocal advocate of that policy — is expected to travel to Pyongyang soon to try to revive the negotiation process and set the stage for a second summit between President Donald Trump and leader Kim Jong Un.

The commentary echoes a speech by North Korea’s foreign minister, Ri Yong Ho, at the United Nations last week in which he claimed North Korea is ready to implement the agreements Trump and Kim made during their first summit, in Singapore in June, but also accused Washington of failing to demonstrate its willingness to ease tensions and build mutual trust.

“Without any trust in the U.S., there will be no confidence in our national security,” he said, “and under such circumstances there is no way we will unilaterally disarm ourselves first.”

The North’s emphasis on lifting sanctions and building trust above all else puts a spotlight on the rift between its position and Washington’s since the Singapore summit, when Trump and Kim issued a vague statement about a nuclear-free peninsula without describing when and how it would occur.

Negotiations between Washington and Pyongyang have since been rocky, with neither side able to agree on a starting point and widespread skepticism in the United States over whether Pyongyang is serious about renouncing an arsenal it sees as the only way to guarantee its safety.

Hopes for progress in the talks got a boost last month, when South Korean President Moon Jae-in met with Kim in Pyongyang for their third summit.

The summit resulted in a joint statement in which the North expressed willingness for a “permanent” dismantling of its main nuclear facility in Nyongbyon — if the United States takes corresponding measures — and the dismantling of a missile engine test site and launch pad in northwestern North Korea.

What the North would see as corresponding measures wasn’t specified. But Tuesday’s commentary and the U.N. statement suggest sanctions are a primary concern.

The 1950-53 Korean War ended in what was intended to be a temporary ceasefire. Moon and Kim are pushing for the end-of-war declaration by December. The declaration would be less difficult to make than a formal peace treaty, and Moon says he and Kim have agreed such a “political declaration” wouldn’t require the pullout of 28,500 U.S. troops stationed in South Korea.