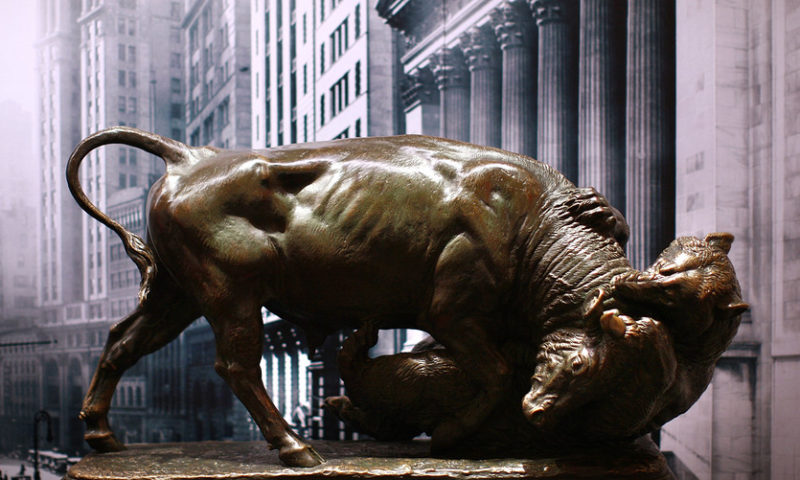 The S&P 500 posted its best quarter since the end of 2013 as stocks closed mostly unchanged for the session on Friday after economic data painted a mixed picture of the economy. 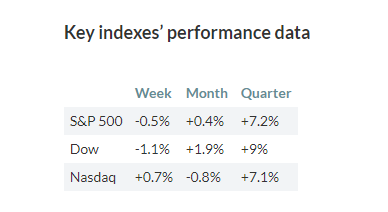 In the third quarter, the S&P 500 rose more than 7% and the Dow advanced 9% with both indexes rising in 11 of the past 12 quarters. The Nasdaq gained more than 7% over the quarter, and is up for its ninth straight quarter.

What drove trading?
Recent sessions have been relatively quiet on Wall Street, with few corporate earnings reports to drive the market. Despite the stock-market loss on the week, the trading range has been tight; the S&P hasn’t closed with a move of even 0.5% in either direction any day this week.

Geopolitical events may take center stage again in coming days after Italy’s antiestablishment government significantly widened its budget-deficit target for next year to fund its electoral promises, a move that will likely put it on collision course with the European Union. The issue is the latest bit of geopolitical turbulence that could impact Wall Street, following a currency crisis in Turkey earlier this summer.

Issues surrounding trade policy also lingered. On Wednesday, President Donald Trump accused Beijing, without public evidence, of trying to interfere in the U.S. midterm elections and of attempting to damage him politically. The accusations come as a trade dispute between the two countries grows more heated with the imposition of a 25% tariff on more than $200 million of Chinese imports to the U.S.

While investors have repeatedly shrugged off trade worries, focusing instead of strong economic data and corporate earnings, any additional developments on this front could dictate short-term market direction.

Political drama over the nomination of Judge Brett Kavanaugh to the Supreme Court continued to dominate the headlines but is not expected to have a direct impact on the market for now. In the latest development, the Kavanaugh nomination cleared the Senate Judiciary Committee, but only after Republican Sen. Jeff Flake called for a delay on the Senate floor vote to allow for a quick FBI probe into sexual assault allegations against Kavanaugh, which the judge has denied.

On the economic front, consumer spending rose 0.3% in August, the slowest pace since February. Personal income also rose by 0.3%. The 12-month increase in the PCE index, the Federal Reserve’s preferred inflation gauge, fell to 2.2% from 2.3%.

What were analysts saying?
Ryan Detrick, senior market strategist at LPL Financial, said trading could become more eventful in the coming days, with October a strong month for stocks.

“October is probably one of the more misunderstood months,” he said. “It is best known for some spectacular crashes, like 1929, 1987 and 2008 — but the reality is it isn’t that bad overall, it is more an extremely volatile month. August and September historically can be weak, and this opens the door for the seasonally bullish fourth quarter, kicking off with October.”

He also noted that companies start to report third-quarter earnings in October, which could drive stock prices in either direction.

“Italy has been a big concern for weeks now, and if the situation gets worse you can expect the market to sell off in a meaningful way. The big issue is contagion: Will this spread? If it does, that could trigger a recession, which will drag down European GDP and have a negative impact for U.S. multinationals,” said Adam Sarhan, chief executive of 50 Park Investments.

“For Tesla, a lot of Musk’s recent actions raise questions about his decision-making abilities,” he said. “If his tweet was just reckless behavior and ego, clearly that will be bad news for the stock. And if this issue means that the Nasdaq, one of the leading indexes this year, starts to turn lower, that would be a real cautious signal to me about growth stocks overall.”

What stocks were in focus?
Shares of Tesla Inc. TSLA, -13.90% sank 14%, it worst daily drop since Nov. 6, 2013, after the Securities and Exchange Commission sued Elon Musk, the electric-car maker’s chairman and chief executive officer. The SEC is alleging that Musk misled investors when he tweeted that he was considering taking the company private, and it is seeking to ban him from serving in his role of CEO.

While Tesla has a limited impact on the broader indexes — it isn’t a component of the S&P 500 — it is sometimes seen as a proxy for high-risk and high-growth stocks, a segment of the market that have been fueling the market’s gains in 2018.

How did other markets do?
Major European indexes fell, with Italy suffering its biggest one-day loss in more than two years after its budget issue. Asian stocks mostly rose, with Japan’s Nikkei hitting its highest level since 1991.

Nvidia is near a ‘tipping point’ in AI dominance, analyst says