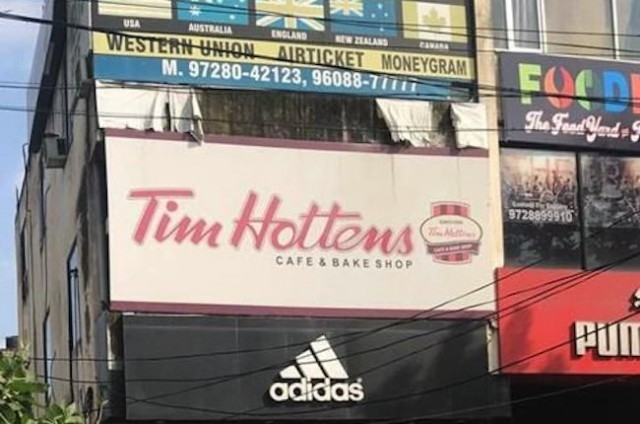 Tim Hortons will seek to shut down an apparent knock-off restaurant in India that uses a name and branding very similar to the coffee-and-doughnut chain.

Tim Hottens, located in Yamunanagar, India, is two letters away from the coffee chain in its name.

Its logo and branding appear to mimic the Canadian chain’s as well. The font and colour of the name in its logo is nearly identical. Tim Hottens also uses the phrases “always fresh” and “cafe & bake shop,” as well as the red-hued striped background in its logo.

Tim Hottens did not immediately respond to requests for comment.

“While we believe that imitation is often the sincerest form of flattery, we do have very high standards when it comes to our brand, the quality of our products and the service we provide our guests,” said Jane Almeida, a spokeswoman for Restaurant Brands International, the parent company of Tim Hortons, in an email.

“Therefore, we will be taking steps to protect our brand and trademarks, including closing down this imitation restaurant.”

She declined to answer whether RBI was aware of the cafe’s existence before the Canadian Press asked about it.

It’s unclear how long Tim Hottens has been open. The store’s first post on its Facebook page, a profile picture of the logo, dates May 8, 2016. Its first Facebook review appeared two days later.

Inside, it appears markedly different from a Canadian Tim Hortons location. Photos show a dark interior that resembles more of a bar or nightclub than a coffee shop.

While it serves coffee, the menu is more expansive and includes alcoholic drinks, like mojitos, and burgers. Wait staff serve the diners.

Reviewers on Facebook call the food “delicious” and the coffee “best… I ever had,” leaving it an average score of 4.6 stars.

Almeida declined to answer whether the company frequently deals with such imitation cases, but this isn’t the first time a knock-off Tim Hortons cafe has cropped up.

In 2015, a Canadian posted a photo of a Tim House cafe under construction in South Korea. The logo also had a striking similarity to that of Tim Hortons.

Later that year, another Canadian posted a photo of Tim Mortons brand coffee bags being sold at a market in South Korea. At the time, Tim Hortons released a statement saying it will take the steps necessary to protect its trademark.

Amazon to build in BC

‘Rock and a hard place’