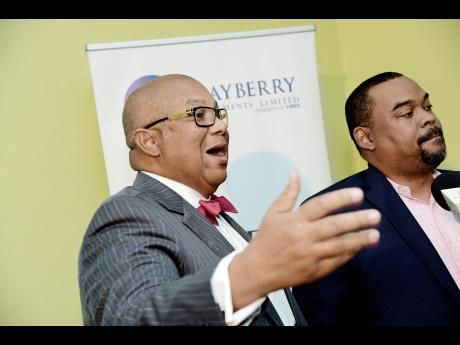 MJE remains bullish on the local stock market, and expects its gains to outperform the cost of funds borrowed.

“MJE just raised $2.2 billion this week. We got it at 7.25 per cent for five years,” said CEO of Mayberry Investments Limited Gary Peart at the company’s monthly investor forum on Wednesday.

Mayberry Jamaica weighed the option of selling a portion of its existing portfolio of stocks to raise the funds, but opted against it, saying those stock values were still climbing. Borrowing cash at a single-digit rate was seen as a more prudent course.

“We have decided to borrow money to take advantage of additional opportunities that we see out there. The funds would allow the company to invest in opportunities which arise,” Peart said.

Borrowing rates have been trending down, tracking with the central bank’s cut in policy rates that were last maintained at two per cent in August. Another rate decision is to be announced on Tuesday by the Bank of Jamaica.

Peart said three years ago, Mayberry would not have thought it likely to borrow at such low rates. Mayberry Chairman Christopher Berry credited the improved macroeconomy and bipartisan fiscal discipline for the current conditions. Both men were speaking at the forum on opportunities in the equity market.

Peart did not disclose which stocks he would acquire with the new funds, but noted that his top equity picks rated as a ‘buy’ included Stationery & Office Supplies Limited, Supreme Ventures, Ironrock Insurance, Sagicor X Fund, JMMB Group, CAC 2000, NCB Financial Group, Lasco Distributors and MJE itself, which listed on the Jamaica Stock Exchange in July.

The Mayberry team sees that figure ballooning even more.

Currently, some blue-chip customers of commercial banks are borrowing below 7.0 per cent for JMD loans and below 5.0 per cent on US dollar debt, but Peart believes that interest rates will not get much lower.

The private sector is not investing enough to take advantage of the low interest rates, he added, while calling for more entrepreneurial ventures or for investors to buy into businesses.

“The capital is available. Now is the time,” Peart said. “We have single-digit loan rates, but it is the older people taking loans to start businesses. The youngsters need to step up to the table and create productive enterprises.”

Peart sees five or six consecutive years of growth for the economy and stock market.

Most stocks are now fully valued or overvalued. Peart said that seeking out deals requires looking at what the earnings would likely to be for listed companies in a few years and whether those stocks will grow into that valuation. Additionally, he argued that investors who are concerned that the market will pull back can choose to invest in high dividend-yielding stocks.

Berry says the market is trading at a multiple of 15 times what it earns annually, coming from a multiple of less than five times in 2011. The difference is that in the last seven years, Jamaica decided that it was going to be like other countries and adopt a fiscal responsibility framework which has put liquidity back into the market, and it has been accepted by both political parties, said Berry.

“We are going to see the single largest bull market we have ever seen. And my view is, it will continue,” the Mayberry chairman said.

“You will eventually see growth in the economy, which will lead to growth in corporate profits, so it will make that PE that looks high, fall because the companies will grow into it,” he said.

The bull market has been sustained in part by new stock market listings since 2016, with more to come.

Mayberry Investments disclosed on Wednesday that it will be broking the listing of state-owned renewable energy company Wigton Windfarm Limited before the March 2019 quarter.

After The Fall: How Significant Is The EM Equities Discount?