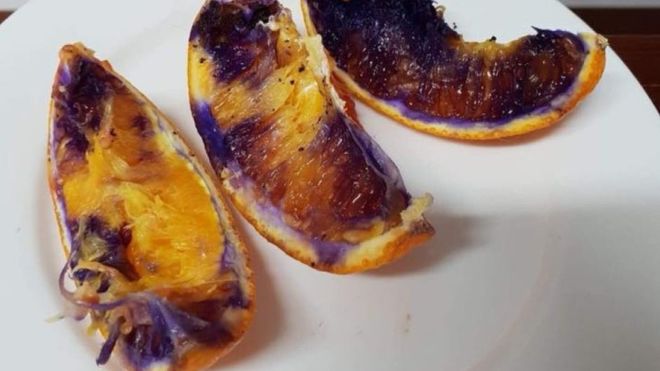 What could cause a freshly sliced orange to suddenly turn purple?

Australian health authorities say they have solved a mystery that prompted much speculation earlier this month.

It began when a Brisbane woman, Neti Moffitt, asked for an investigation into why an orange – partially eaten by her son – had later changed colour.

Scientists have now revealed it was due to a natural reaction between the fruit and a sharpened knife. The orange did not pose a health risk, they added.

Stewart Carswell, Queensland Health’s chief chemist, said “numerous tests” were conducted to determine the cause of the colour change.

The results revealed that anthocyanins – a naturally occurring antioxidant in oranges – had reacted with iron particles from the newly sharpened blade, he said.

Ms Moffitt told the BBC that it was “brilliant” to have the mystery solved.

“It looks like someone’s dipped it on an ink pad, which I guarantee you we haven’t,” she told the Australian Broadcasting Corporation earlier this month.

“My first thought was I hope it has had no ill effect on my child. But he’s fine, absolutely not a drama.”

On Wednesday, Mr Carswell described the investigation as unusual.

“We see samples that range from blood, urine, water, soil, fish and foodstuffs. So to have an orange come through was really different for our team,” he said in a statement.

The Queensland government said it had assured the family that the orange was not a risk to health.