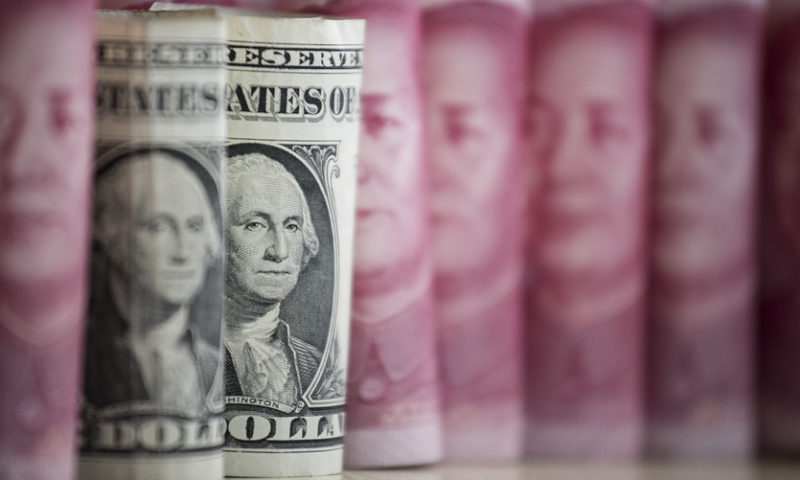 The U.S. dollar weakened firmly on Monday, as financial markets worried about renewed escalation of a persistent trade spat between the U.S. and China.

On Friday, a Bloomberg report indicating that President Donald Trump wanted to proceed with tariffs on some $200 billion more Chinese goods, which could be announced as early as this week, while The Wall Street Journal cited a senior Chinese official saying China wasn’t “going to negotiation with a gun pointed to its head.”

“The markets remain on edge regarding the possible fresh set of tariffs from the U.S. against China, with President Trump clearly eager to ratchet up the tensions,” wrote Boris Schlossberg, managing director of FX strategy at BK Asset Management. For much of the year, the dollar has been stronger in spite of the trade-war worries, and even inspired safe haven flows along the way as risk sentiment switched off.

Early Monday Trump tweeted that of the success of tariffs as a negotiating tactic, while also threatening further levies if trade partners weren’t making “fair deals.”

Elsewhere, the British pound GBPUSD, -0.1140% strengthened and broke through the psychologically important barrier of $1.31, on the back of hopes of progress in the Irish border Brexit question. While Northern Ireland is part of the U.K., the Republic of Ireland is a European Union member state, raising the question of the future of the currently open border between the two countries.

Brexit negotiations between London and Brussels are back in focus this week, with the first of three summits held on Thursday. Officials comments over the past weeks have shown that both the EU and the U.K. are hoping to come to an agreement about their post-Brexit relationship in the coming weeks.

Sterling last bought $1.3162, compared with $1.3068 late Friday in New York. The currency “will be exposed to volatility throughout the coming week,” said Jameel Ahmad, global head of currency strategy and market research at FXTM. “U.K. Prime Minister Theresa May is set for another round of key Brexit discussions throughout the week and the pound has shown on various occasions in the past couple of weeks that it remains highly sensitive to Brexit headlines. If concerns mount that the U.K. is heading towards a hard Brexit, we shouldn’t be surprised if sterling once against falls below $1.30 this week.”

Meanwhile, the International Monetary Fund said that no matter which way Brexit will be resolved, it will likely bring a financial hit to the U.K. economy.

“While all likely Brexit outcomes will entail costs for the UK economy by departing from the frictionless single market that now prevails, an agreement that minimizes the introduction of new tariff and nontariff barriers would best protect growth and incomes in the UK and EU. Over time, new trade agreements with countries outside the EU could eventually pare some of these losses for the UK. However, such agreements are unlikely to bring sufficient benefits to offset the costs imposed by leaving the EU,” said the IMF statement.