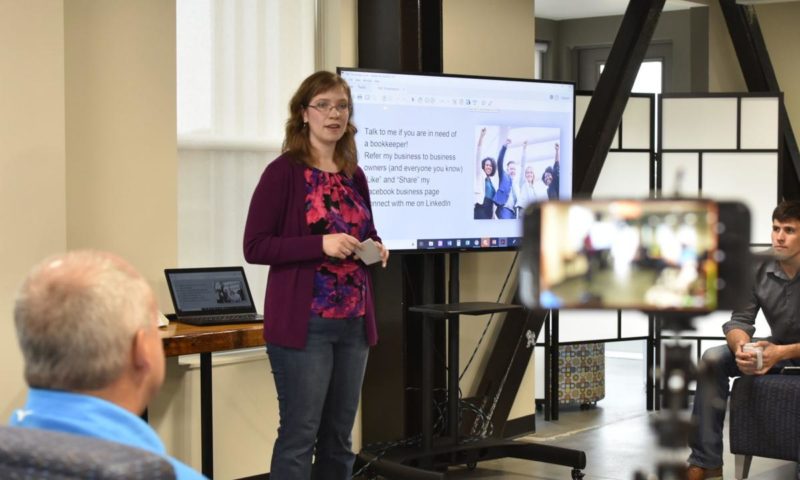 CEDAR FALLS – Most business deals go down over coffee or drinks, as opposed to a business room, said Red Cedar’s co-founder and executive director Danny Laudick.

That’s the idea behind One Million Cups, a monthly event where entrepreneurs can present their business pitches to other entrepreneurs over coffee.

“What if you could bring people together for one million cups of coffee to help support early-stage companies?” Laudick said. “The idea behind it was seeing how much actual growth and business development comes out of coffee conversations.”

The companies get to make a six-minute pitch followed by 20 minutes of questions on the first Wednesday of every month.

For four years companies from around the Cedar Valley have made pitches at this event.

On Sept. 5, Crystal Cornell gave her pitch to the group for the company Elegant Foundations Bookkeeping LLC. It was the first time she’d made her pitch in this kind of setting.

“Right now I’m still building my clientele and this seemed like very good way to get my word out there,” Cornell said.

Last month she attended the event and liked what she saw.

“I don’t like public speaking, but I decided that I would try it,” Cornell said. “This was a good group of people to get in front of.”

Practicing and making slides helped make Cornell feel more prepared, she said. She’s gone to other networking events, but always felt like she struggled with her pitch.

“I know what I do, but it’s hard for me to explain it, so this helps,” Cornell said.

One Million Cups was first started by the Kauffman Foundation in Kansas City, Mo.

“They kind of franchised the event,” Laudick said. “You can apply to the Kauffman Foundation to organize it and run it.”

The University of Northern Iowa originally applied and ran the event four years ago.

Local companies like Cedar Valley Food Runner and Kubo food truck both have made their pitches at One Million Cups meetings, Laudick said.

The presentations are all filmed and the presenter gets a free copy for their review.

Woke business: have big brands found a conscience or a just marketing ploy?

How Jack Ma made capitalism cool in communist China