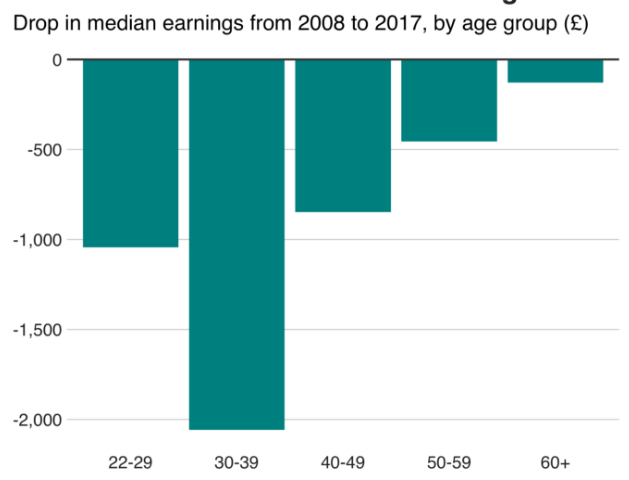 The substantial impact of the financial crisis has left people’s wages 3% below what they were a decade ago, new research reveals.

The analysis done for the BBC by the Institute for Fiscal Studies shows that on average people’s real annual wages are £800 lower.

Paul Johnson, director of the IFS, said: “The average earnings of those in their 20s and 30s fell especially sharply in the immediate aftermath of the recession, perhaps as employers were able to cut starting wages more than wages of those already in work.”

While this age group has seen earnings grow in recent years, it has not been “enough to make up for initial losses,” he said.

Mr Johnson added: “Pensioners have done much better than younger people on average. In part this is because they are less reliant on earnings and so haven’t suffered from falls in earnings.”

In addition, however, “government has chosen to protect the state pensions and other benefits received by pensioners,” Mr Johnson said.

Even more stark is the analysis from the IFS that, if wage growth trends between 1998 and 2008 had continued, people would on average be earning £3,500 more.

How did the crisis affect your finances?

Homes: House prices in London and the south east may have risen sharply in the decade since the crisis. But in large swathes of the UK prices have still not recovered to the levels seen in 2008.

Savings: The last decade has been a disaster for Britain’s savers, especially many elderly people who rely on their savings income. Savers who once enjoyed rates of 5%-plus now get a fraction of that.

Borrowing: Average household debt has climbed from less than £3,000 to £4,000 in the last decade. There are lots of reasons for this, not least the easy credit available through plastic cards.

Banking: The way we bank has completely changed. Challenger banks have emerged, and mobile technology means we increasingly sort our finances using phones. But online banking has brought branch closures – and cyber-attacks.

“We should never stop reminding ourselves just what an astonishing decade we have just lived through, and continue to live through,” said Mr Johnson.

“The UK economy has broken record after record, and not generally in a good way.

“On the upside employment levels are remarkably high and, in spite of how it may feel, the gap between rich and poor has actually narrowed somewhat, but the gap between old and young has grown and grown.”

A regional breakdown of the effect of the financial crisis on wages shows that London, the East Midlands and the south-west of England have been worst hit.

The IFS said that the financial crisis of a decade ago sparked the deepest recession since the Second World War and had been remarkable for the “persistence of its effects”.

Economic growth is still low by historic standards and the total debts of the government have grown by £1tn.

The public spending cuts pushed through by the governments of 2010 and 2015 were “historically unprecedented” the IFS said.

The government has said that there are now record levels of employment and that the introduction of the National Living Wage and tax cuts had helped support many millions of working people.

The deficit – that is the difference between what the government spends on services and receives in tax revenues – has also been substantially reduced.