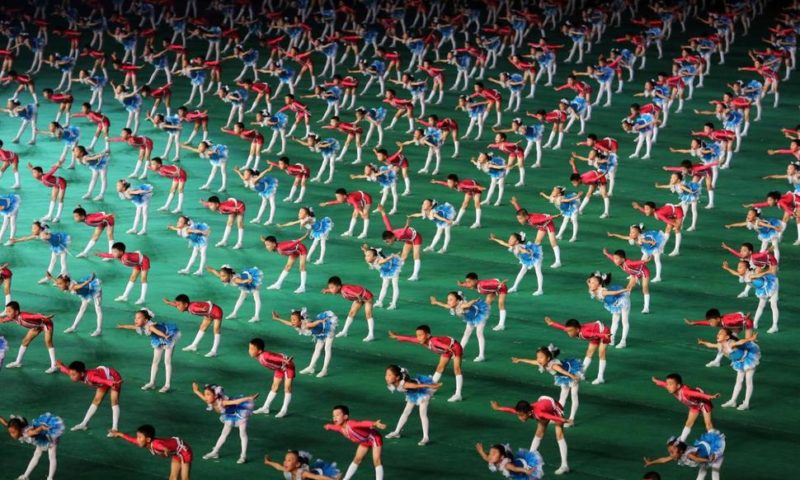 PYONGYANG, North Korea (AP) — North Korea is bringing back one of its most iconic art forms — mass games performed by tens of thousands of people working in precise unison — to mark its 70th anniversary this weekend.

The performance, which takes months if not years of intense preparation and training, is being called “Glorious Country” this year.

It is literally the embodiment of socialist ideals — North Korea’s most ubiquitous slogan, seen in posters and beaming from neon signs from atop tall buildings, is “Single-minded Unity.” Pyongyang sees the performances, last held in 2013, as one of its most highly effective forms of propaganda, highlighting its social and political agenda both at home, where it will be televised repeatedly for months to come, and abroad.

To make sure it is seen around the world, North Korea has invited a large contingent of foreign media to cover it and the other events marking the 70th anniversary of its founding day on Sunday, including a major military parade.

The games are also a time-tested source of tourist dollars for North Korea. Tourists from the United States are still banned by their government from traveling to the North in response to the death of American college student Otto Warmbier, who was convicted of theft at a Pyongyang hotel and died shortly after his release in June last year. But ticket sales to tourists from China and Europe are reportedly brisk despite prices that start at 100 euros ($115) and go all the way up to 800 euros ($925) for VIP seating.

The games generally follow an epic narrative with a historical and revolutionary theme and are divided into a number of segments.

Because so many people are involved — they once were given a world record for having more than 100,000 participants — the performers have been likened to pixilated humans. With the individual so totally melded into the larger whole, performing for the glorification of the leader, the games have been criticized as an insouciant homage to authoritarianism.

The games in the past have been held in Pyongyang’s May Day Stadium, which according to North Korea can seat 150,000 people. Officials won’t comment on details, but the performances are expected to continue, three or four times a week, until at least early October.

North Korea first staged its mass games in 2002, when Kim’s father, Kim Jong Il, was the country’s leader. They continued almost without interruption on an annual basis until 2014, when they were not held at all.

Kim Jong Un’s touch may already be apparent in the naming of the games. Previously they were called the Arirang games after a famous Korean folk tale about separated lovers.

The current games’ more nationalistic name may reflect the younger Kim’s ambitions for his time as the country’s ruler.