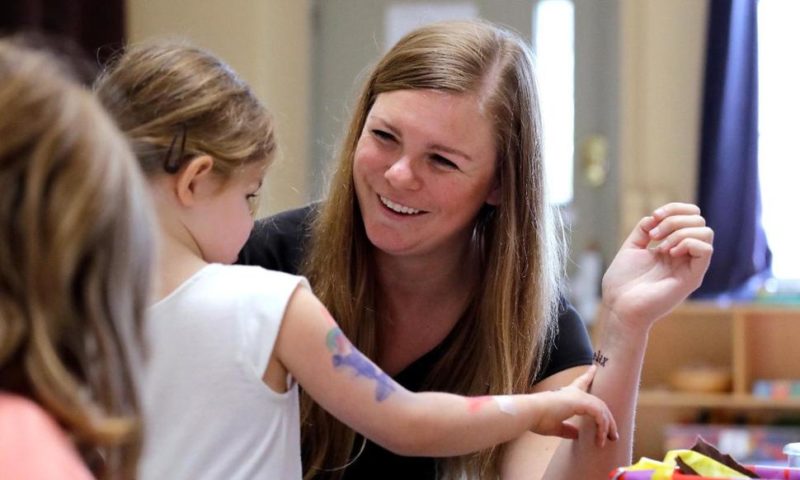 A workforce crisis in a booming U.S. economy is prompting the child care industry to use business tactics more that resemble Wall Street more than “Sesame Street.”.

Underlying the phenomenon is a shrinking pool of child care workers with employers still offering low pay while demand for high-quality child care programs skyrockets, particularly in expensive urban areas like Seattle, with a rise in children needing care and a decline in providers.

Child care workers in the U.S. make less than parking lot attendants and dog-walkers, said Marcy Whitebook, co-director of the University of California, Berkeley’s Center for the Study of Child Care Employment.

In Seattle, the fastest growing U.S. big city, the population and household incomes have skyrocketed because of the technology boom — creating a child care hole with costs reaching about $2,000 monthly per child.

The advocacy group Child Care Aware reports that in 2017, there were 132,000 more children up to age 6 in Washington state who could use formal child care arrangements, compared to the number of available child care slots. Nationally, Whitebook said two-thirds of all children in that age range have parents who are both working.

Some child care centers are so popular in Seattle, New York and San Francisco that parents pay to get on waiting lists while still trying to conceive.

That meant Rachel Lipsky and her husband were already at a disadvantage when they started looking for child care while she was pregnant in 2012.

She thinks the system is troubled but doesn’t blame the workers, saying “they work two times harder than I do. Who am I to quibble?”

Lipsky, a 38-year-old government agency project manager, paid the waitlist fees before her child was out of the womb, didn’t get her daughter into her first choice care centers but eventually secured a spot for the girl and another child born later. She said the road to finding care for her children, now 5 and 3, was daunting, emotional, time-consuming and pricey.

Licensed providers caring for children from infancy through 5 years old say they have tried for years to professionalize what is largely a decentralized array of small businesses. But the industry as a whole has always stumbled with high labor turnover as the jobs offer low pay and high stress. Experts say care for young children is expensive because it requires intensive labor, but families can only afford to pay so much.

Aubrey Zoli, 38, said she loves working with 4- and 5-year-olds at the popular Wallingford Child Care Center in Seattle but struggles with the $16.90 hourly pay, especially with a bachelor’s degree.

“I love the job but I can’t afford to live it. A lot of our teachers have second incomes from second projects because it’s impossible to live on these wages in Seattle,” said Zoli, who also does work as a musician and event-planner.

Her boss, Jenny Cimbalnik, concedes that the nonprofit Wallingford center can’t afford higher wages because it already puts 80 to 90 percent of revenue into staffing costs.

The median annual pay for child care workers — including those in formal facilities and home-based centers, as well as private nannies — increased by 13 percent between 2014 and 2017, to $22,290, according to the U.S. Bureau of Labor Statistics. During the same period, the pool of U.S. child care workers dropped to 562,420 workers, down 21,000 people, or 3.5 percent of the workforce.

Laws regulate how many children child care centers can take and busy centers say it’s not unusual for parents to try to bribe center officials with money or gifts for child care slots or offers to pay extra tuition. Some parents sob while pleading for the slots — a practice child care centers call “cold-crying.”

The shift comes as a growing body of brain development research shows children who attend good preschools are better off as adults, with higher incomes and healthier lifestyles. That has contributed to political momentum for government-subsidized pre-Kindergarten programs, which has also affected child care centers.

Business operations suffered at the Wallingford center when the city launched a pre-K program in 2014, Cimbalnik said. Toddlers that cost less to care for left for free preschool, creating an imbalanced demand among higher-cost infants. Wallingford was also stretched financially when the city’s $15 hourly minimum wage law took effect in 2015.

Amid the challenges, Bright Horizons Children’s Centers, one of the country’s largest publicly traded, for-profit child care businesses, recently announced a new college tuition incentive program for its employees. CEO Stephen Kramer said the company’s turnover rate is well below the 50 percent industry average, but he wanted to boost the numbers of career-minded early education professionals.

Bright Horizons’ noncompete-like policy forbids families and workers from using each other for private babysitting opportunities because the company cannot manage the work outside of its facilities, Kramer said.

“If something goes wrong, it becomes an uncomfortable situation,” he said.

Getting on a waitlist at a Bright Horizons location in Seattle costs $100 while Wallingford charges $75. Many parents report spending hundreds of dollars to get their names on as many waitlists as possible, realizing they may not get slots for their children at most locations.

Wallingford also has a separate waiting list for its free monthly tours.

How a Canadian company is turning fish guts into facial mask

What Next For Ethereum (ETH)?