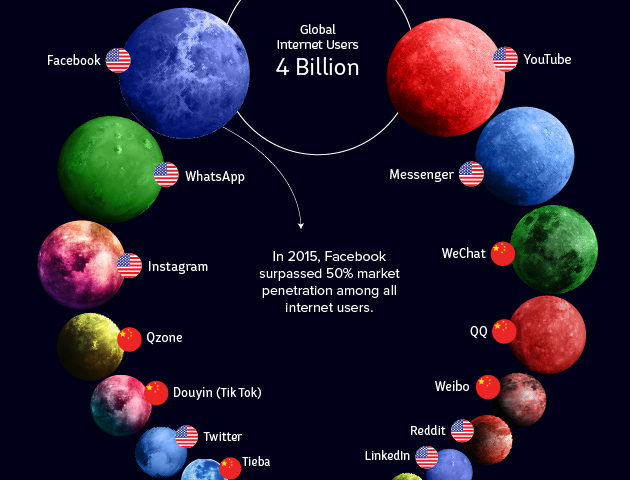 Top 4 largest social-media platforms in the world are U.S.-based

In a world increasingly interconnected, billions of people rely on the web to chat, socialize and share. That has turned social-media platforms into powerful tools for communication, entertainment, social justice and change.

The World Economic Forum and the Visual Capitalist on Tuesday jointly published a chart that put into perspective the global reach and impact of social media giants like Facebook Inc. FB, +0.19% which boasts 2.2 billion monthly average users and has exceeded 50% market penetration.

At the same time, it also illustrates the diversity of the social-media universe which, despite the dominance by U.S. names, is becoming more diverse, with growing international platforms, represented by minor planets in the graphic, cropping up.

Here then are the world’s biggest social-media platforms in order of number of active monthly users. Not surprisingly, three out of top four are Facebook and its “satellite” companies while YouTube, which Alphabet Inc. GOOG, +0.64% GOOGL, +0.80% bought in 2006 for $1.65 billion, was the second largest.

“Facebook is a behemoth, but adding in the other platforms run by Mark Zuckerberg paints a clear picture of who controls the social media in 2018,” said Nick Routley, creative director at Visual Capitalist, said in a WEF blog.

China’s WeChat and QQ came in at fifth and seventh, respectively, with Instagram squeezing in at sixth.

Of the 21 platforms depicted, 10 are American, seven are Chinese, and two are Japanese, although Line is actually a Japanese subsidiary of Korea’s Naver Corp. 035420, -1.06% Also represented are social-media entities from the U.K. and Russia.

Many of those social-medial names are represented in an exchange-traded fund, the Global X Social Media ETF SOCL, -0.12% However, that ETF has gained 1.7% so far this year, badly underperforming the broader market, with the technology-laden Nasdaq Composite Index up more than 16% in the first eight months of the year, and the broad-market S&P 500 index SPX, +0.03% on track for an 8.4% year-to-date return.

Opinion: This is what will stop the record stock market