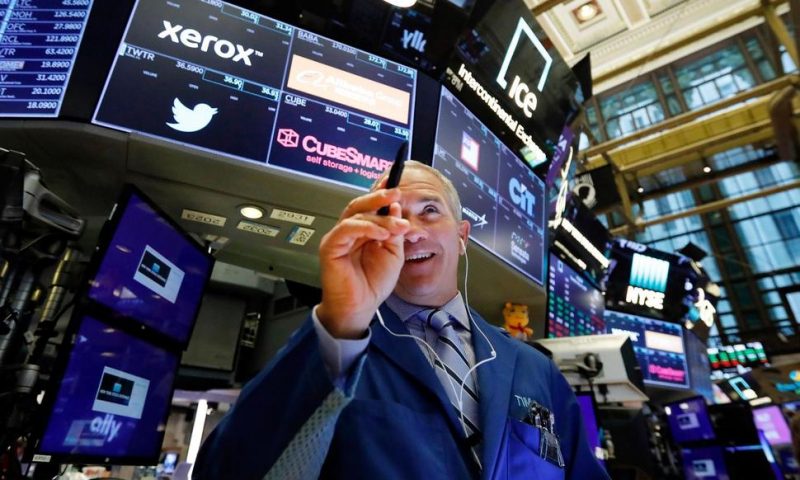 NEW YORK — Stocks climbed on Tuesday and clawed back a chunk of their losses from Monday’s rout, the latest whipsaw move as investors weigh just how badly the escalating U.S.-China trade war will hurt the economy.

The day’s rally was nearly a mirror image of Monday’s plunge, when the S&P 500 had its worst day since early January, just not as severe: Technology companies led the way higher after bearing the brunt of the selling on Monday, Treasury yields rose modestly and gold gave back a bit of its gains.

Tuesday’s rally came after another round of morning Trump tweets on trade. He said, “When the time is right we will make a deal with China,” and he cited his “unlimited” respect for and friendship with China’s leader.

Investors are looking for a “place of equilibrium,” said Mark Hackett, chief of investment research for Nationwide Investment Management.

“My skepticism is that there’s really not a lot of news driving the rally,” he said. “It feels like an attempted recovery that may not have legs.”

In the meantime, any further hints of resolution on the trade dispute — or Twitter storms — could drive markets into their next swing.

“We’re not counting on a full resolution,” said John Lynch, chief investment strategist at LPL Financial. “But, we’re looking for a path to progress.”

The worries about trade have shattered what had been a remarkably steady rise for stocks at the start of this year. As 2019 began, investors increasingly bet that a trade deal would happen, and the Federal Reserve said it would take a pause in raising interest rates, which helped the S&P 500 rocket to its best start to a year in decades.

If the trade dispute gets worse, or lasts longer than many expect, it could hurt confidence among businesses and households. If that in turn drives spending lower, it would lead to lower economic growth and corporate profits.

On Tuesday, at least, such worries eased. An index known as Wall Street’s “fear gauge,” which measures how much traders are paying to protect themselves from upcoming price swings for stocks, dropped 12.1%. A day earlier, it had spiked 28.1 %.

The VIX index remains higher than it’s been for much of the past five years, but fear is considerably lower than it was during the market sell-off late last year sparked by worries about a possible recession.

Investors also returned to stocks of tech companies, which may have the most to lose from a protracted U.S.-China trade battle because many of their customers and suppliers are abroad. Tech stocks in the S&P 500 jumped 1.6%, with semiconductor companies making particularly big gains.

On the flip side were utility stocks, which were the only one of the 11 sectors that make up the S&P 500 to fall. A day earlier, when all the fear in the market put an alluring spotlight on the utility sector’s steady profits and dividends, they had been the only S&P 500 sector to manage a gain.

Other investments seen as safe harbors also dropped, such as U.S. government bonds. When a bond’s price falls, its yield rises, and the yield on the 10-year Treasury rose to 2.41% from 2.40% late Monday. It was at 2.45% at the end of last week.

Gold is another investment that tends to do fade when investors are feeling more optimistic, and it fell $5.50 to settle at $1,296.30 per ounce.

Consumers Could Be Collateral Damage if US Expands Tariffs