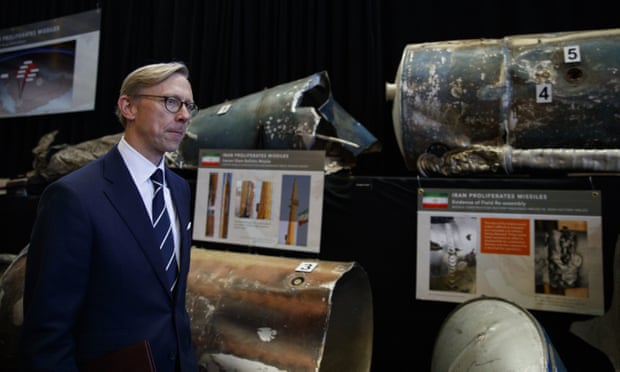 France and the UK have echoed warnings by Donald Trump’s administration that Iran may be in breach of United Nations obligations by testing medium-range ballistic missiles capable of carrying multiple warheads.

The remarks from Paris and London will be seen by the US government as the first sign that its key European partners may yet be persuaded to view Iran’s broader behaviour as so dangerous that their support for the 2015 Iran nuclear deal can no longer be justified.

The US secretary of state, Mike Pompeo, criticised Iran’s missile programme at the weekend and will be at a Nato foreign ministers’ meeting in Brussels over the next two days to underline his message about the threat to Middle East stability posed by Iran. He is also due to meet the Israeli prime minister, Benjamin Netanyahu, in Brussels.

In a statement issued on Saturday, Pompeo said Iran had tested a medium-range ballistic missile, violating a UN resolution. The missile, according to Pompeo, is capable of carrying multiple warheads and “has a range that allows it to strike parts of Europe and anywhere in the Middle East”.

He added: “This test violates UN security council resolution 2231 that bans Iran from undertaking ‘any activity related to ballistic missiles designed to be capable of delivering nuclear weapons, including launches using such ballistic missile technology’.”

Pompeo has been pressing Germany, France and the UK to join the US in withdrawing from the Iran nuclear accord signed during the presidency of Barack Obama in 2015. Trump unilaterally pulled out of the deal, known as the Joint Comprehensive Plan of Action (JCPOA), in May, reimposing broad economic sanctions, with some exemptions, on any country or company that seeks to trade with Iran.

The UK foreign secretary, Jeremy Hunt, said in a statement on Saturday he was “deeply concerned by Iran’s test firing of a medium-range ballistic missile. Provocative, threatening and inconsistent with UNSCR 2231. Our support for JCPOA in no way lessens our concern at Iran’s destabilising missile programme and determination that it should cease.”

His remarks were backed up by the UK representative on the EU’s political and security committee, Paul Johnston, who said it was important to address the breadth of the Iranian challenge, and added that “important discussions would be held at the EU foreign affairs council on 10 December”.

On Monday the French president’s office echoed the UK in saying it was deeply concerned and the tests were “provocative and destabilising”. It urged Iran to stop all testing of ballistic missiles capable of carrying nuclear warheads.

The Iranian foreign ministry and many independent experts challenged the claim that the tests breached the UN resolution.

The language of the UN resolution “calls on” rather than “forbids” Iran from testing its missiles, according to Trita Parsi, the president of the National Iranian American Council. The UN resolution cited by Pompeo is the nuclear deal the Trump administration withdrew from this year, Parsi added.

At a presentation on Thursday, Brian Hook, the US special representative on Iran, attacked the US’s European allies, saying that since leaving the deal US officials had found “freedom and leverage” to tackle Iran’s regional influence, and he chided other nations for not getting on board.

“The current international environment has created unacceptably low expectations for the regime in Tehran,” he said. “[If] the demands of … the Iranian regime seem too many, it is because Iran’s malign activities are too numerous.”

Overseas students turn away from US