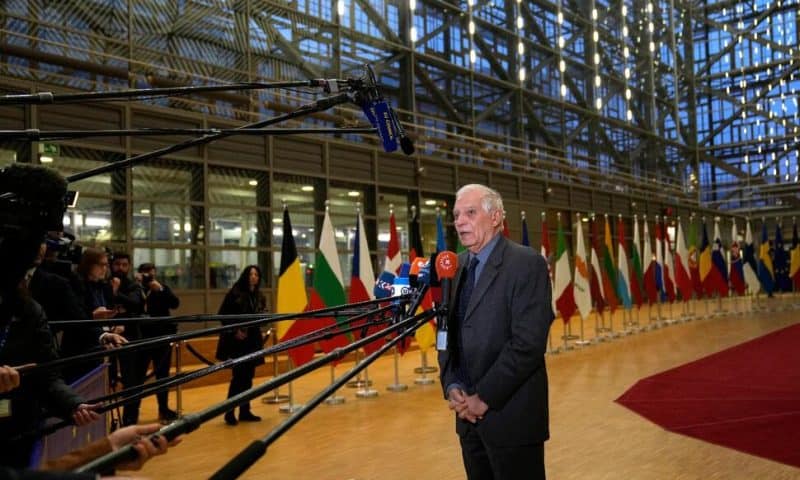 BRUSSELS — The European Union on Monday imposed sanctions on dozens of Iranian officials and organizations, including a government minister, regional governors and lawmakers, suspected in the security crackdown on protestors, but did not add Iran’s Revolutionary Guard to its terror group blacklist.

At a meeting in Brussels, EU foreign ministers agreed to slap a travel ban and asset freeze on Iran’s Sports and Youth Minister Hamid Sajjadi, accusing him of pressuring Iran’s athletes into silence, including an Iranian climber who competed without Islamic headdress at a competition in Seoul.

The Iranian Special Police Forces were also targeted, accused of using “excessive violence and lethal force against unarmed protestors, including women and children … by firing automatic weapons at protestors.”

Another asset freeze was imposed on the Headquarters for Enjoining Right and Forbidding Evil, an Iranian government institution that the EU believes is responsible “for determining and enforcing excessively strict behavioral models in society.”

Companies linked to cyber security, spyware, social media filtering, and the production of security equipment allegedly used in the crackdown were also hit. Restrictive measures were slapped on senior officers from the Revolutionary Guard and some of its regional units.

The 27-nation bloc had already imposed three rounds of sanctions on Iranian officials and organizations — including ministers, military officers and Iran’s morality police — for human rights abuses over the protests that erupted in Iran in mid-September over the death of Mahsa Amini.

The 22-year-old woman died after being arrested by the morality police for allegedly violating the Islamic Republic’s strict dress code. Women have played a leading role in the protests, with many publicly removing the compulsory Islamic headscarf, known as the hijab.

At least four people have been executed since the demonstrations began, following rapid, closed-door trials. At least 519 people have been killed and more than 19,200 others arrested, according to Human Rights Activists in Iran, a group that’s been monitoring the rallies.

The movement has become one of the greatest challenges to Iran’s Shiite theocracy since the 1979 Islamic Revolution.

The move means that the EU’s sanctions now apply to a total of 164 people and 31 “entities,” like agencies, companies or banks. A ban on exports to Iran of equipment which might be used in the crackdown or for monitoring telecommunications is also in place.

But the ministers did not move forward on blacklisting the Guard, despite last week’s appeal from the European Parliament for them to do so.

EU foreign policy chief Josep Borrell, who chaired the meeting, said that this could only happen once a court in a member country hands down a ruling condemning the Guard for terror acts.

“It is something that cannot be decided without a court decision first,” he told reporters.

European officials also fear that blacklisting the Guard would all but end the slim hopes the bloc might have of resuscitating the Iran nuclear agreement, which has been on ice since the Trump administration withdrew from the internationally-backed accord in 2018.

Iran, Schallenberg said, “is on a collision course, with not only the international community, as far as the safeties of the nuclear program are concerned, but also with its own people, with the brutal crackdown of the civil society movement.”