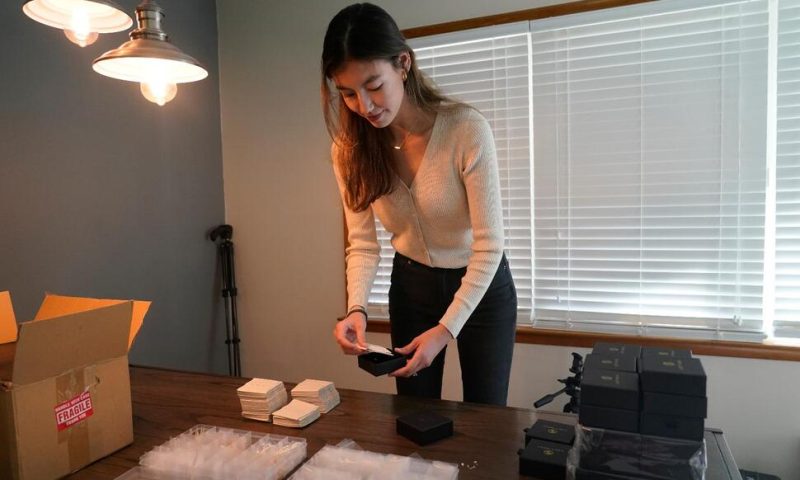 Small businesses are stocking the shelves early this holiday season and waiting to see how many gifts inflation-weary shoppers feel like giving.

NEW YORK — Small businesses are stocking the shelves early this holiday season and waiting to see how many gifts inflation-weary shoppers feel like giving.

Holiday shopping was relatively strong during the past two years as shoppers flocked online to spend, aided by pandemic stimulus dollars. Sales in November and December have been averaging roughly 20% of annual retail sales, according to National Retail Federation, making the holiday season critical for many retailers.

This year, small businesses are bracing for a more muted season, as some Americans spend more cautiously. AlixPartners, the global consulting firm, forecasts that holiday sales will rise between 4% to 7%, far below last year’s growth of 16%. With inflation running above 8%, retailers would see a decrease in real sales.

To prepare, owners say they’re ordering inventory earlier to avoid the supply-chain snags that frustrated them the past two holiday seasons and to draw in early birds. They’re stepping up discounts as much as they can in the face of their own higher costs. And owners also hope more people will shop in stores and holiday markets after doing more of their shopping online during the pandemic.

Max Rhodes, CEO of Faire, an online marketplace used by small businesses to sell their wares wholesale as well as buy goods for retail shops, said he’s seeing earlier ordering from merchants who for two years had trouble getting enough holiday inventory stocked in time for Christmas. Stores faced shortages of everything from holiday décor to gift items as COVID-19 lockdowns forced factories to shut, costs rose and fewer shipping containers and truckers were available — all causing delivery snarls.

“The one thing we’re certain of is it’s not going to be predictable … We really don’t know what to expect and our retailers feel the same way,” Rhodes said .

Mat Pond operates The Epicurean Trader in San Francisco, including four brick-and-mortar stores, an online shop and a corporate gift basket business. In past years, he started building inventory in November, but this year he’s already stocking up on items such as gourmet food, chocolate, wine and giftware. He’s seeing corporations order holiday gift baskets earlier as well.

“Everyone’s planning ahead,” Pond said. “I think everybody’s learning from the past two years.”

While the pandemic’s economic impact has subsided somewhat, consumers are now being tag-teamed by high inflation and rising interest rates. Overall, spending has held up, although some Americans have been forced to pull back on discretionary items. Any decline can be meaningful because consumer spending makes up 70% of economic activity.

Hannah Nash, the owner of the online jeweler Lucy Nash, expects sales of her earrings, bracelets and other jewelry to slow after two years of strong growth. The main culprit: inflation.

“There is less money going around to the average person and we expect their living expenses to impact how much they can spend on holiday shopping,” Nash said.

Nash also expects more people to shop in stores during these holidays. She started her business, based in Indianapolis, during the pandemic, when online shopping boomed. The percentage of total retail sales done online jumped from 11.5% in 2019 to 17.7% in 2020, then rose again to 18.8% last year, according the Mastercard SpendingPulse, which tracks all kinds of payments, including those by cash and debit card.

Nash is stepping up discounts and offering bundles to attract shoppers: Her plans include a 15% discount for new customers this year, up from 10%, starting in November. And she’ll offer bundles of products that are about 20% cheaper than buying items separately.

Major retailers such as Amazon and Walmart are also offering holiday deals to cash-strapped Americans earlier this year. Amazon held a two-day discount event on Oct. 11-12 where the average order was $46.68, $13 less than what shoppers spent during the company’s Prime Day sales event in July, according to the data group Numerator.

Some business owners are hoping to take advantage of any shift to shopping in holiday markets and in stores.

Kimberly Behzadi operates Read It & Eat Box in Buffalo, N.Y., which sells themed boxes with food and a book in each box. She started the business in 2020, during the pandemic. She has an online shop but is hoping the return of holiday markets to full capacity will boost sales. She depends a lot on the holidays — 40% of her annual revenue comes between October and December.

She’s planning on being at six markets this year, with two more applications pending.

“Last year, holiday markets were still limited by the necessary safety protocols for Covid-19 ,” she said. “This year, gratefully, we are able to attend and sell at more holiday markets locally, so my expectation is to double my holiday revenue this year.”

“With inflation rates high this year I expect consumers to be looking for deals, so I have adapted my holiday strategy to include more bundles and deals,” she said. She’s offering a $60 box that’s bundled with a blind-date book worth $25 for Black Friday, for example.

Mariana Leung-Weinstein sells alcohol infused jam and marshmallows and other farm-inspired gifts at about 25 stores via her Wicked Finch Farm brand in Pawling, N.Y. that she started in 2019. She’s focusing on stocking up in stores in case online sales slow.

“I expect people will enjoy seeing and touching things in person this time around, which puts more of my focus in getting my products in physical stores in time for the holidays,” she said.