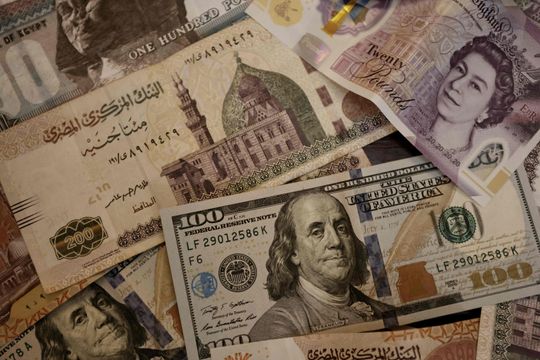 ‘We are seeing an uptick in complaints by corporate executives about currency headwinds rising in most sectors within the S&P 500,’ says RBC Capital Markets

The stronger U.S. dollar is “a clear negative” for the S&P 500, but stocks in areas such as financials, utilities and real-estate investment trusts appear more insulated to the “doldrums” of the currency’s strengthening historically, according to RBC Capital Markets.

While the performance of U.S. equities tends to be broadly weak when the dollar is strengthening, selecting sectors that typically have held up better against its rise may help limit the pain in investment portfolios, said Lori Calvasina, head of U.S. equity strategy at RBC Capital Markets, in a research note Monday.

“We are seeing an uptick in complaints by corporate executives about currency headwinds rising in most sectors within the S&P 500,” said Calvasina. “But historically,” she said, trends in earnings-per-share revisions “are less sensitive to a stronger U.S. dollar in sectors such as financials, utilities, and REITs.”

By contrast, industrials, materials, consumer staples and technology are most sensitive to a stronger dollar, a chart in the RBC report shows. That’s based on data since 2004 that considers earnings-per-share, or EPS, revisions sensitivity among large-cap stocks. 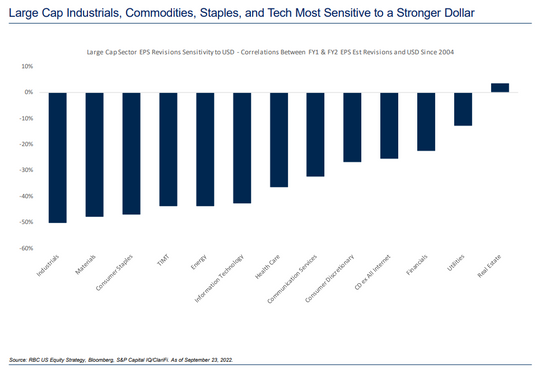 While a stronger dollar is negative for the S&P 500, “U.S. equities still tend to benefit from safe-haven status within the broader global equity landscape,” according to the RBC note.

“This may limit downside in U.S. stocks on a relative basis, particularly since most of the investors we’ve spoken with recently seem to agree that the U.S. consumer is in better shape than the European consumer,” said Calvasina.

The ICE US Dollar index DXY, 0.07%, a measure of the dollar’s strength against a basket of rivals, has soared more than 16% so far this year, FactSet data show, at last check. The dollar is rising as the Federal Reserve aggressively hikes interest rates to combat the highest inflation in decades.

The U.S. stock market had an ugly September as investors grappled with rising rates and feared a hawkish Fed risks triggering a recession. The Dow Jones Industrial Average and S&P 500 each suffered their worst monthly percentage declines since March 2020, when markets were reeling amid COVID-19 fears.

Last week, many U.S. equity investors were also unsettled by the Bank of England’s surprise intervention in the U.K.’s bond market, stoking concerns about financial market stability, according to RBC.

The three major benchmarks tumbled in September, with the Dow sinking 8.8% in September, the S&P 500 sliding 9.3% and the tech-laden Nasdaq dropping 10.5%. That marked three straight quarters of losses for all three indexes.

So far this year, Dow is down around 19%, while the S&P 500 has dropped about 23% and the Nasdaq has tanked around 31% based on Monday afternoon trading, FactSet data show, at last check.