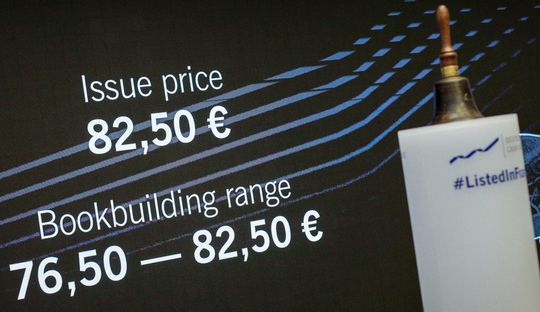 Shares in luxury vehicle maker Porsche edged higher in its first day of trade on Thursday, after pricing at the top end of the range.

Porsche P911, 0.00% preference shares, which do not carry voting rights, opened at €84 after pricing at €82.50, giving it a market cap of €75 billion ($72 billion). The stock then traded in a tight range. In a nod to its most famous product, Porsche has 911 million shares outstanding. It’s the biggest IPO in Germany in more than 25 years.

“Though Porsche hasn’t traded below issue price, early trading is reflecting investor concerns over the macro environment and volatility driven by some investors ditching tiny allocations in the market,” said Alastair Mankin, vice president of the event driven group at Cowen.

Volkswagen VOW3, -5.29% shares declined 5%. Porsch Automobil Holding PAH3, -7.89%, the investment vehicle that agreed to pay the IPO price plus 7.5% for a quarter of Porshe with voting rights plus one share, fell 7%.

VW is planning to distribute 49% of the proceeds in a special dividend, and set a December meeting to put the proposal to a shareholder vote. Volkswagen raised about €19.5 billion through the IPO.

At the IPO price, Porsche’s market value is 88% that of VW’s €85 billion market cap, noted Tom Narayan, an analyst at RBC Capital Markets, which he said represents a corporate governance discount given VW’s continued control, as well as the dual CEO role of Oliver Blume at both Porsche AG and VW.

He said Porsche SE, the investment vehicle, is buying the stock at 6x estimated 2023 earnings before interest, tax, depreciation and amortization, versus his estimate that a standalone valuation should be above 10x EBITDA.

The IPO, which also the backing of Qatar’s investment authority and Norway’s sovereign wealth fund, proved to be well received despite a difficult environment. Porsche in its prospectus said it’s also sensitive to skyrocketing natural-gas costs. It makes most of its vehicles in Germany and Slovakia.

Its top market is China, whose economy has suffered from continued lockdowns in response to COVID-19.