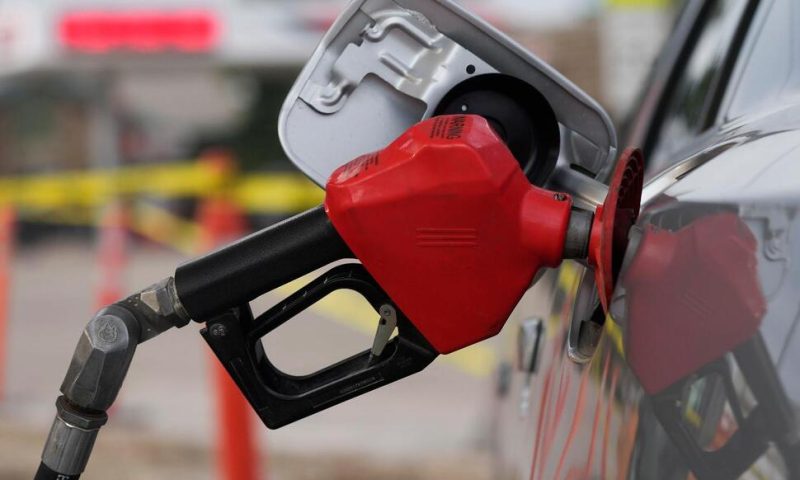 U.S. gas prices have dipped under $4 a gallon for the first time in more than five months.

DALLAS — Gasoline prices have dipped under $4 for the first time in more than five months — good news for consumers who are struggling with high prices for many other essentials.

AAA said the national average for a gallon of regular was $3.99 on Thursday, down from the mid-June record of $5.02. However, that’s still about 80 cents higher than the average a year ago.

Energy is a key factor in the cost of many goods and services, and falling prices for gas, airline tickets and clothes are giving consumers a bit of relief, although inflation is still close to a four-decade high.

Glen Smith, a for-hire driver, sized up the price — $3.85 a gallon — while waiting between rides at a gas station in Kenner, Louisiana.

Oil prices began rising in mid-2020 as economies recovered from the initial shock of the pandemic. They rose again when the U.S. and allies announced sanctions against Russian oil over the country’s war against Ukraine.

Recently, however, oil prices have dropped on concern about slowing economic growth around the world. U.S. benchmark crude oil has recently dipped close to $90 a barrel from over $120 a barrel in June.

It is unclear whether gasoline prices got so high that consumers cut back on their driving. Some experts believe that is true, although they acknowledge that the evidence is largely anecdotal.

“I don’t know that $5 was the magic amount. I think it was the amount of increase in a short period of time,” said Peter Schwarz, an expert on energy pricing and an economics professor at the University of North Carolina at Charlotte. “People were starting to watch their driving.”

Schwarz expects oil prices to remain relatively stable at least for the next month or so, particularly after OPEC and partners including Russia agreed to only a small oil production increase in September, which won’t be enough to drive prices lower.

Christian vom Lehn, an economics professor at Brigham Young University, said the price of oil is the key factor for gasoline, but that seasonal trends could also keep prices from surging again.

“We are coming to the end of summer, and summer is a peak travel season, so demand is naturally going to fall,” he said. “That is certainly contributing to the most recent decline” in gas prices.

The average gas price has dropped 58 straight days, but that streak will end soon, predicted Tom Kloza, head of energy analysis at the Oil Price Information Service. He said the industry will face challenges to meet gasoline demand for the rest of the year.

Kloza noted that it’s still early in the hurricane season, which in the past has shut down some of the nation’s biggest refineries that sit in hurricane-prone areas of the Gulf Coast; the Gulf of Mexico is speckled with oil-producing platforms. Also, he said, “refinery runs will come down because of a lot of delayed maintenance that can’t be delayed indefinitely.”

Prices at the pump are likely to be a major issue heading into the mid-term elections in November.

Republicans blame President Joe Biden for the high gasoline prices, seizing on his decisions to cancel a permit for a major pipeline and suspend new oil and gas leases on federal lands.

“That’s over one dollar down from peak prices,” he tweeted. “And I’m not done calling on oil producers to increase global supply so prices can drop even more.”

Biden has previously targeted the oil companies, accusing them of not producing as much energy as they could while posting huge profits. “Exxon made more money than God this year,” he said in June.

Exxon said it has increased oil production. The CEO of Chevron said Biden was trying to vilify his industry.

Biden has also ordered the release of oil from the nation’s strategic petroleum reserve this year. While not large enough to account for the drop in gasoline prices, the extra supply from reserves might have helped stem the rise in pump prices, according to analysts.

The nationwide average for gas hasn’t been under $4 since early March. Prices topped out at $5.02 a gallon on June 14, according to AAA. They declined slowly the rest of June, then began dropping more rapidly. The shopping app GasBuddy reported that the national average dropped under $4 on Tuesday.

A year ago, the nationwide average price was just under $3.19 a gallon, according to AAA. After a long climb, that price has dropped steadily this summer, falling 15 cents in the past week and 69 cents in the last month,

“If you talk to people who are not economists, gas prices always go up faster than they come down,” said Schwarz, the energy-pricing expert. “These are still high gas prices.”